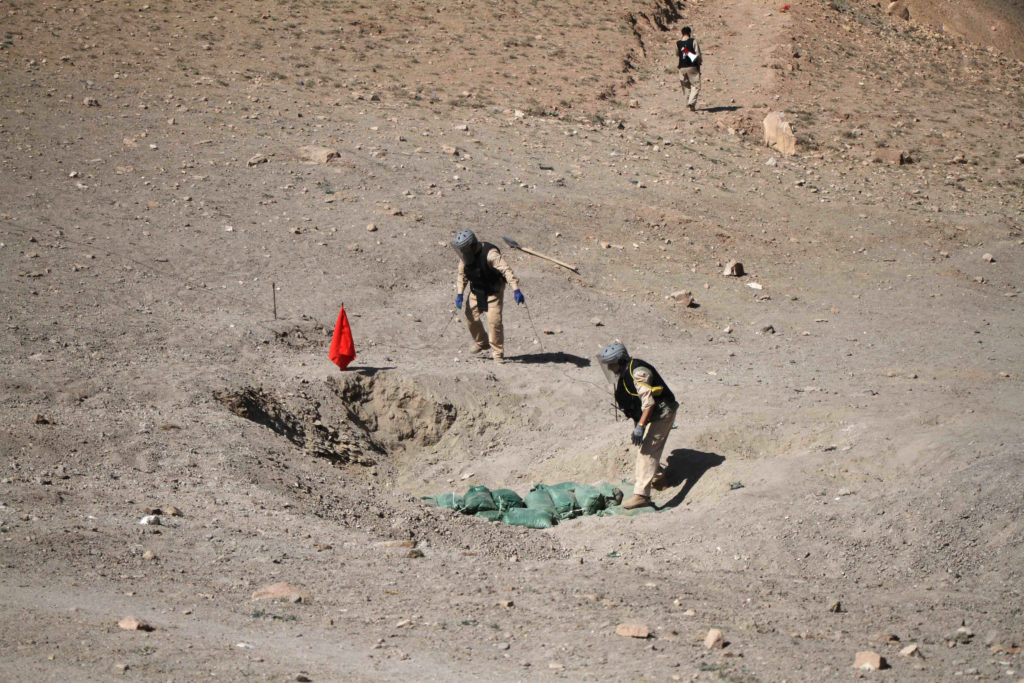 It’s been more than half a year since Azerbaijan won a decisive military victory over Armenia by re-taking Azerbaijani districts occupied since the early 1990s.

The areas were once home to more than 600,000 ethnic Azeris. But during the three-decade occupation, virtually all infrastructure was systematically looted, rendering them uninhabitable.

An even bigger challenge is the huge numbers of landmines and unexploded ordinances – cluster bomb remnants and other hazards left over by the long war.

The worldwide demining organisation HALO Trust says there is no real idea of the extent of the hazard. “The extent of landmine contamination from the current conflict is unknown,” it said. The areas around the formerly occupied Azerbaijani districts have long been regarded as some of the most heavily mined on earth.

Since Azerbaijan drove Armenian forces out in late 2020, at least 23 people have been killed and more than 100 injured by mines, booby-traps, or other hidden explosive devices in the districts.

While some of the casualties have been military, most have been among Azerbaijani civilians who have wandered back in the hope of getting a glimpse of what – most often little – remains of their former homes.

The price for the curiosity has often been deadly, with civilians blowing up on anti-tank mines, anti-personnel mines, or unexploded bombs, apparently from cluster-type munitions.

The issue has become the most serious impediment to bringing some sort of civility to relations between the two countries, which have effectively been at war even before they were independent of the Soviet Union in 1991.

Azerbaijan says Armenia is deliberately withholding maps that detail where the mines are laid. Armenia has accused Azerbaijan of continuing to hold Armenian POWs but has said little about the mine issue, which effectively renders the de-occupied areas un-inhabitable.

Baku says the issue is one of vengeance from Yerevan. Experts have also opined that sheer incompetence may also be a  likely reason; Armenians had been trained with old Soviet weapons, had retreated haphazardly, and in extreme haste, forgot, did not care, or lost track of all the mines they planted.

Temuri Yakobashvili, a regional expert and former Georgian Ambassador to the United States, is now the President of TY Strategies.

One of his company’s current disciplines is bringing unique technologies to discover where hidden mines or explosives are – since it is unclear if any full maps – if they exist – can unveil the total extent of the problem.

“Of course, in the early phases of the war, it’s likely maps were made of minefields near front-line positions,” he said.

“But in the last phase, it could be that mines were simply tossed around desperately by retreating (Armenian) troops,” he said. “That makes the task extremely difficult,” he added. “Serious new technologies are needed to determine where those mines are.”

His firm is currently engaged in employing these new methods in other areas of the world.

Even then experts say it could take years to remove unexploded ordinances and more than a decade to clear anti-personnel and anti-tank mines.

ANAMA says it has already disarmed 50 unexploded missiles and rockets, 7,449  anti-personnel mines, and 3,643 anti-tank mines as of May 31, as well as 9,033 unexploded ordinances – bomblets or similar explosives.

Most of the work is done in the painstaking manually way – with human mine detectors, sometimes with the help of mine-sniffing dogs. Azerbaijan has received twenty modern MEMATTs (Mechanical Mine Clearing Equipment) heavy-duty devices from Turkey to speed up the process. Additionally, Turkish mine-clearance experts are training their Azerbaijani counterparts as well as taking part in demining operations.

Russia, which brokered the 2020 cessation of hostilities and has 2,000 peacekeepers in the area, is also providing large scale demining equipment.

Azerbaijanis who still dare return to their ravaged hometowns – harrowing sights on their own – are then greeted by ubiquitous markers and signs which strictly warn of hazards and point to the few “safe” areas where movement is possible.

But despite the conspicuous warnings against veering off the cleared pathways, the mines are so widespread that even seemingly safe areas have proven to be deathtraps, endangering both professionals involved in the life-saving work as well as civilians. The situation has reached a crisis point, with the reconstruction of the vast areas slowed down by the need to remove the deadly hazards first.

The mines used by the Armenians were mostly of Soviet origin, and the tactics date to the 1960s when the Soviets routinely used mines not only to clear enemy presence in various hotspots around the world but to maximize casualties and to demoralize “enemies”.

Armenia is not a signatory to the  PMBC (Anti-Personnel Mine Ban Convention). Just before the decisive phase of last year’s blitzkrieg in which Armenian forces were routed, HALO Trust was already complaining that neither Yerevan nor Armenian backed separatists in Azerbaijan’s Nagorno-Karabakh district had provided it with any assistance in demining. It concluded that there was no government strategy to clear the mines.

Evidence of the Soviet military “innovation” persists worldwide: In Yemen, the Houthis and their affiliated clans, who had once sided with the Saudi forces against the Soviet-backed Egyptian Nasserist forces have gotten their hands on the remnants of the Soviet supplies abandoned by the latter.

The use of landmines against civilians is never innocent, explained Chris Clark, a demining specialist who works with Project Masam, a Saudi landmine clearance effort in Yemen. In most cases, it is the resort of cowards utilized during the retreat from battle; it is not a winning strategy, except as psychological warfare.

Despite entreaties by the Azerbaijani authorities, those desperate to see what remains of their homelands they were forced to abandon continue to flock to the liberated territories.

Even official restrictions on the numbers of people allowed in the area at any point in time have not stopped adventurers and explorers, as well as the elderly seeking to take a glimpse of their former homes.

Even given the massive effort by the Azerbaijani government, they are still short on demining equipment and seek international cooperation to bring in additional professionals to facilitate the process.

Following a recent discussion between Azerbaijani President Aliyev and the U.S. Secretary of State Anthony Blinken, the latter had underscored in writing the U.S. commitment to humanitarian assistance for Azerbaijan, suspending the dinosaur of the 1990s crisis, the so-called congressional “907” amendment, which restricted direct U.S. aid to Baku. The act was pushed through in the early 1990s when Armenia’s lobby power in Washington was at its peak.

Given the fact that Azerbaijan has successfully integrated over a million refugees and has come back from the economic crisis of the 1990s, it appears that the humanitarian assistance in question may reference a more specific type of help, such as assistance with managing the land mine crisis, which remains a top national security priority for the country.