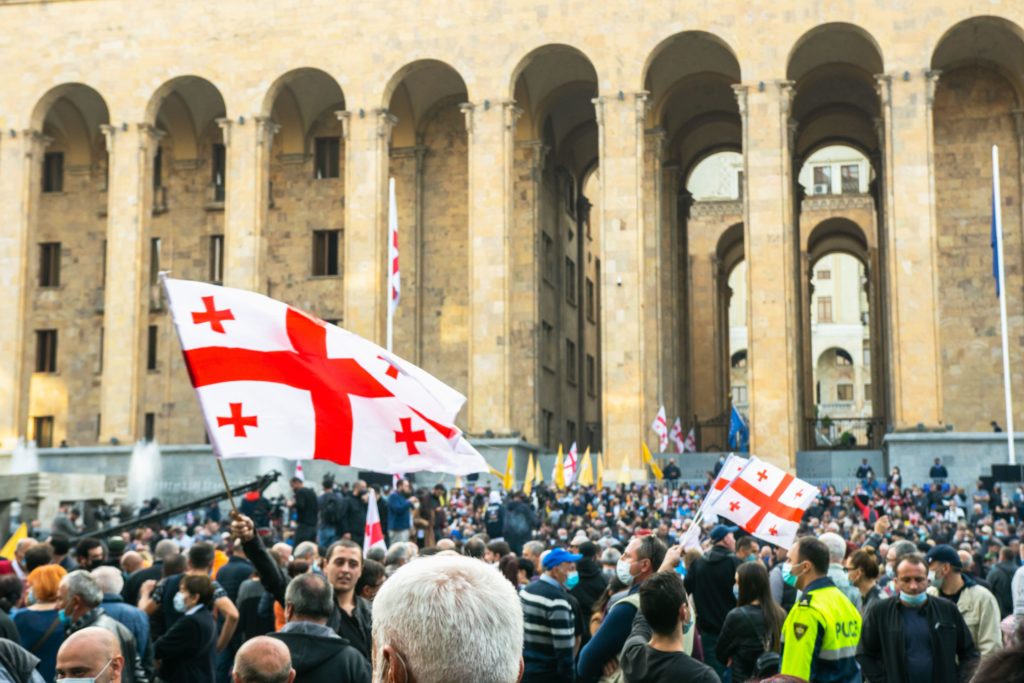 Opposition protest outside parliament in the capital Tbilisi (Alamy)

The United States voiced concern over the conduct of Georgia’s local elections won by the ruling Georgian Dream Party but the protracted turmoil in the ex-Soviet state showed no sign of abating as former President Mikheil Saakashvili, imprisoned since his surprise return to the country, called for intensified protests against his detention and the outcome of the vote.

Run-off votes were held last weekend in the poll, seen as a test for the ruling party after a year-long standoff between the Georgian Dream and the opposition United National Movement (UNM), founded by Saakashvili, who led the country from 2004-13 and was convicted in absentia on charges of abuse of office.

The flamboyant Saakashvili was detained shortly after entering Georgia on the eve of the election vowing to “save the country”  and has been on hunger strike in a prison outside the capital. Saakashvili, who held various administrative posts in Ukraine while in exile, said on his Facebook page he had lost 20 kg since he began refusing food and his supporters called for him to be treated in a clinic.

Georgian Dream cemented its victory by winning mayoral positions in all big cities as well as the majority of seats in local and municipal councils across the country of 3.7 million.

“Widespread violations in the pre-election period and on both election days adversely affected the ability of citizens to vote freely,” the U.S. Embassy said in a statement.

Rather than improving the atmosphere by addressing problems identified in the first round of polls, the embassy said, “intimidation, offensive rhetoric, misuse of administrative resources, and reports of blatant vote-buying and other violations continued, and a politicised media further inflamed the polarised atmosphere.

“We are particularly troubled by credible reports of violence against election observers and the media during both rounds of the election.” the embassy said.

International observers from the Organisation for Cooperation and Security in Europe and the European Union gave a guarded endorsement of the election, but voiced misgivings over threats of violence and allegations of cheating. They said the second round “was generally well administered but continued polarisation coupled with an escalation of negative rhetoric adversely affected the process”.

About 3,000 UNM supporters massed in the capital to demand a revision of the election results and for Saakashvili’s release. Other protesters gathered in the city of Rustavi, outside the prison where Saakashvili is being held.

“These elections were not just totally rigged, they dared to do everything with their violence, blackmailing and intimidation,” Nika Melia, the UNM leader, jailed for three months this year on charges of fomenting violence, told the rally. “We don’t accept these results.” 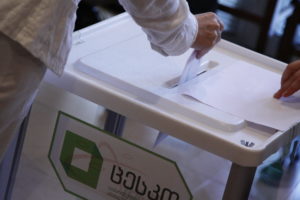 The opposition pledged to stage further protests which have been held sporadically as the election proceeded. One mass rally in mid-October brought together tens of thousands of Saakashvili’s supporters onto Tbilisi’s streets.

Georgia has been mired in crisis since inconclusive parliamentary elections a year ago, with results disputed by the UNM and other opposition parties.  Months of political impasse led to a European Union-brokered agreement last May to restore normal parliamentary activity, launch judicial and electoral reform and secure the release of opposition leader Melia.

But Saakashvili’s return and detention threw the country into fresh turmoil.

In a statement issued from his prison cell, Saakashvili called on his supporters to “take power back.”

“We won this election and the group of bandits who usurped the Georgian government snatched this victory from us,” he said on Facebook. “They robbed us and deprived us of our most basic right to be the masters of our own country.”

Saakashvili urged the opposition to launch a new boycott of parliament — as some opposition leaders did earlier this year. One such leader, the head of the Lelo party, Mamuka Khazaradze, said he would stay away from the assembly.

Saakashvili’s doctor and his lawyers oppose proposals by officials to transfer him to a prison hospital if his condition worsens and want him treated in a private clinic.

Georgian Prime Minister Irakli Garibashvili, asked about Saakashvili’s health, raised eyebrows last week by disdainfully telling a television programme that “the law says an individual has the right to commit suicide. If an individual decides to kill themselves, they can….the state cannot take responsibility for this, of course.”

The Georgian Dream had initially said it would call an early national election if it failed to win 43 percent of the vote in last month’s local polls, but later backed out of that commitment.

The next parliamentary election is due in 2024.

In the first round of the local polls, the Georgian Dream won 47 percent and the UNM 31 percent, with the remaining votes being distributed among other opposition parties. In single-mandate contests, the ruling party candidates won 44 of 59 mayoral races.

In the second round, Georgian Dream candidates secured 27 seats in local and municipal councils, while opposition contenders got 15 seats. The ruling party fell short of securing the majority of seats in two self-governing cities – Batumi and Rustavi, and in five municipalities of Georgia’s western Samegrelo region.