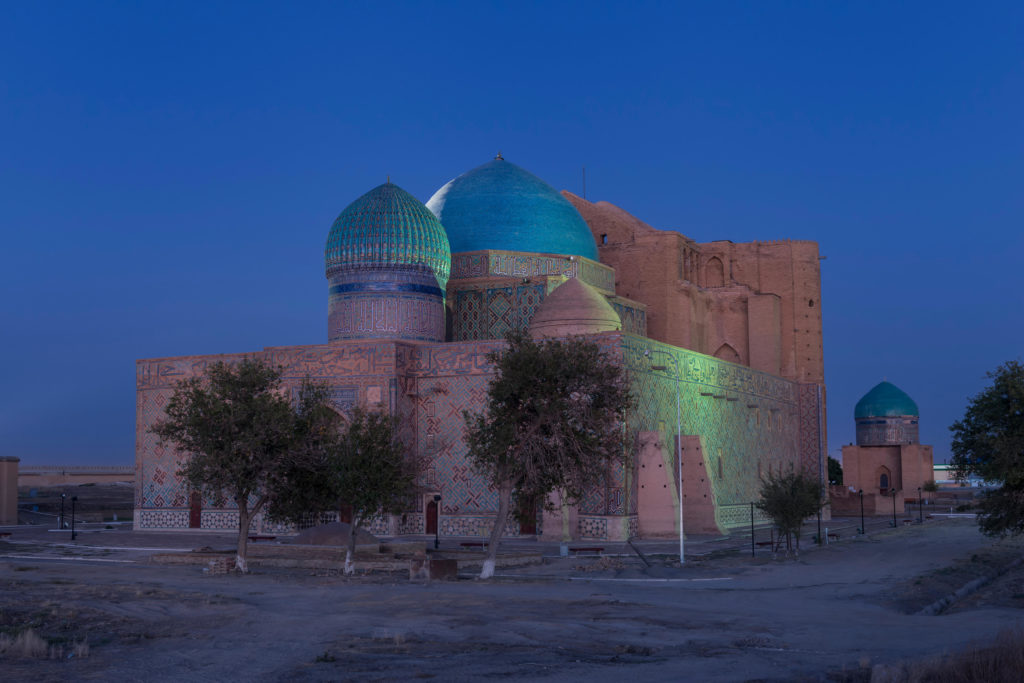 Despite the COVID-19 pandemic raging across the world, Kazakhstan is gambling on a brand-new tourist destination, Turkestan, to boost the holiday appeal of the Central Asian nation. This forgotten city, which has more than 1,500 years of history, has been re-built, re-thought and re-birthed by Kazakhstani officials, putting it back on the world map.

On April 10, the largest multifunctional tourist complex in Central Asia, “Keruen-Saray,” was officially opened in the city of Turkestan. The complex covers 20.5 hectares opposite of 800-year old mausoleum of Khoja Ahmed Yassawi, built in the ancient Silk Road style, to complement and provide continuity with the preserved archaic site.

Inside is a Silk-Road fantasy: alleys of merchants and artisans from the Silk Road era, a “flying theatre”, an amphitheatre for horse shows, and an oriental bazaar. It also boasts tourist facilities such as shopping malls and boutiques, hotels, restaurants, a spa, fitness centre, cinema and a family entertainment centre, all built according to the same theme.

The structures are connected by a water channel, known among visitors as the  “Kazakh Venice”. This water channel is also a part of the entertainment: tourists can take a ride on boats through the complex and enjoy watching the on-water theatrical show “Parade of boats”.

Although the city of Turkestan was always a popular destination for internal tourism, it was more widely associated with pilgrimage, not entertainment. The city is one of the most ancient settlements within the borders of what is modern Kazakhstan. It is known that in the XII century a poet and a Sufi, who had a powerful influence on the development of Sufi orders, lived and was buried there. Honouring his legacy, Turco-Mongol conqueror Timur, who was the emperor of the city at the time, commissioned the construction of a mausoleum and a mosque.

In the Islamic world, Turkestan became known as a religious centre. It is said that a significant share of the historical part of the city was destroyed during the Kazakh-Dzungar wars. However, some crucial and important religious constructions were preserved throughout the Middle Ages, the Russian Empire and the Soviet Union. After gaining independence, Kazakh officials revived and supported the spread of Islam as a part of the newly formed Kazakh identity. The religious sites of Turkestan became Kazakhstanis’ major pilgrimage destination, as the idea of Islamisation returned after almost 70 years of atheism under Soviet rulers.

Soviet culture’s abstention from religion led to Turkestan remaining neglected and undeveloped for many years. Until 2018, when the plan for reconstruction was first introduced, the city had very poor infrastructure. During the  “Old Turkestan – New Opportunities” forum in 2018, 19 agreements on the implementation of investment projects, worth $1.7 billion, were signed between Turkestan officials and foreign companies.

According to Nursultan Nazarbayev, the first President of Kazakhstan, the investments in reconstruction were a collaborative effort between the government and private investors. As of July 2021, that the project so far has cost 87 billion tenge ($204 million). The city is still being developed: Kazakhstan’s government is planning to invest 1 trillion tenge in total as a part of the tourism industry development concept for 2018-2025 for the Turkestan region.

According to this plan, by the end of 2025, the number of tourists is expected to reach 2.5 million. These developments are expected to increase economic growth in the region, the poorest in Kazakhstan, by 1.5 times by 2025.

While infrastructure remains one of the country’s weakest links, planners have invested in entertainment, travel and accommodation facilities. a new music and drama theatre was established, equipped with modern technology and a capacity of 510. A modern scientific library, “Farab”, was built alongside it, referring to Al-Farabi, an Islamic philosopher, believed to have been born in what is now modern Kazakhstan. The library has reading rooms, co-working centres, photo, video and audio recording studios, calligraphy, pottery, workshops, as well as a cinema and concert hall, coffee shops, book and souvenir stores and handicrafts. A modern international airport was built in Turkestan, with Turkish Airlines expected to operate direct flights to Istanbul. Accommodation is provided by big names including Rixos and Hilton, as well as local luxury Karavansaray Turkistan Hotel. Near them, the government decided to found the Turkestan International University of Tourism and Hospitality to educate and prepare qualified specialists in the field to develop Kazakhstan’s tourist potential.

For now, Turkestan’s appeal to the wider world is untested. It remains to be seen whether, once the COVID-19 travel restrictions for foreigners ease, Kazakhstan’s investment will pay off.