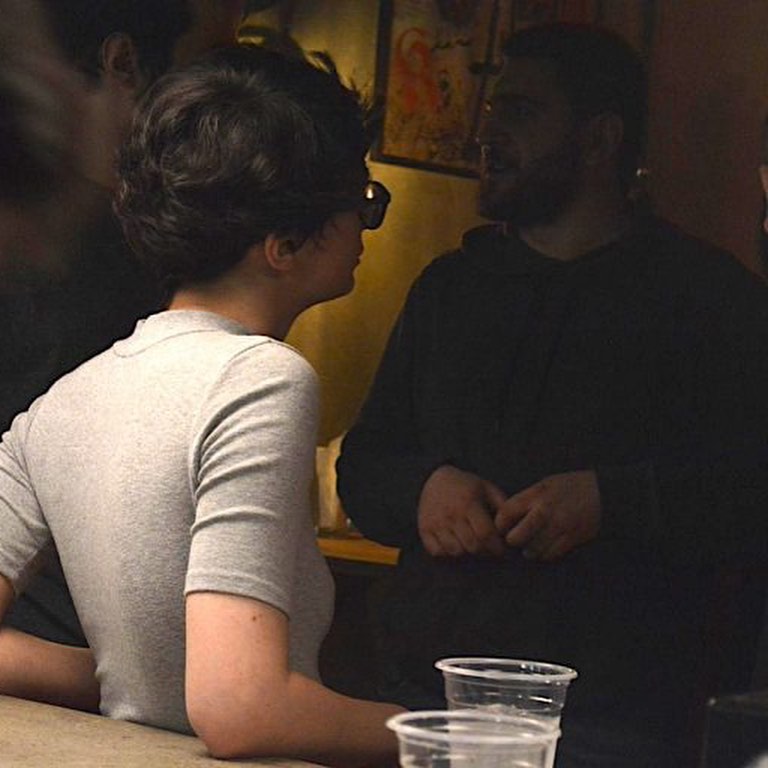 Almost every week, a small group of people gathers in the basement of the Cond House, one of the most hidden places in Yerevan. They are all stand-up artists and fans of this form of performance art.

Performances usually start at around ten in the evening. The pub is dark, the air is full of cigarette smoke, and the customers (thanks to the beer) are already in a good mood. Some of them settled down on the stairs since all the places in the small basement are taken.

Ani Barseghyan takes the microphone and greets the audience.

Ani is one of the female stand-ups in the team. She is usually the one conducting events.

The performance in which Ani was supposed to take part was cancelled due to the lockdown amid the coronavirus pandemic.

A few months later, when the restrictions were lifted, war broke out.

It seemed that the development of club stand-up in Armenia was postponed indefinitely. In post-war Armenia, no one was in the mood to laugh, however, after the war, about six months later, the stand-up returned.

Stand-up performances are held in the pubs of Yerevan almost every week.

Ani is one of the thousands of residents of Armenia who lost a loved one in the war. Humour and laughter, she said, helped her overcome the pain.

Ani talks about the war. In one of her performances, for example, she raises the issue of sexualizing uniforms․ Isn’t the soldier killed because the form is sexy?

“After this speech of mine, a man came up to me and asked why I was making fun of our soldiers? The idea was that my friend was buried in this uniform, and I did not want to sexualize it,” says Ani.

However, when you touch upon the topic of war and tragic losses, you need a special approach.

“There were a lot of jokes related to the war. I don’t think there is any topic that you cannot joke about. But if you touch on sensitive topics, you have to make sure that the audience understands this,” says Ani.

Women and 18+ humour in Armenia

Stand-up club Yerevan is one of the first in Armenia to hold “18+” events without censorship. Ani is one of three women in the team and there are two to three times more men in it. It is believed that the public is less responsive to women’s stand-ups, but Ani is not particularly worried, since she sees a number of advantages.

“When we (women – ed.) speak from the stage on controversial topics, using ambiguous vocabulary, it makes a shocking impression on the public, but at the same time helps people open up,” says Ani.

Uncensored humour is really well received, and Ani has an explanation for that. Her audience is prepared and open to such jokes. In all cases, performances are always preceded by a series of warnings: if you are not ready for jokes on any topic, it is better not to come to the performances – the performance will be “18+” or “21+”.

Ani’s humour definitely has a single thematic line, which can be seen in almost all of her numbers. Her jokes are about women, family, war, boyfriend, sexism, discrimination. These are the topics that “cannot be joked about”.

“Once I got feedback that I was talking about things that were very intimate and they liked it, but that’s why they weren’t funny. This, to be honest, is my favourite genre of stand-up comedy – when you are not laughing, but just communicating with people,” she says.

“Their reaction is not loud laughter, but a kind of positive feeling. And when you talk about a problem that worries your audience, they understand that they are not alone – there is even a therapeutic effect in this. This approach opens up a lot more for them than just jokes. “

Ani talks about important social and cultural issues with humour but argues that the only problem she wants to solve with laughter is to take taboo topics and deal with them openly.

The future of the club stand-up

Ani does not associate her financial future with the club stand-up. Both she and the rest of the team have other professions and stand-up is a hobby for them.

The future of club stand-up in Armenia is still uncertain. It is difficult to imagine whether this sphere will develop or remain a Yerevan subculture with a small audience that survives thanks to a few enthusiasts.

Instead of answering such difficult questions, stand-ups simply offer to visit stand-up club Yerevan next Saturday evening and have some fun.

(This story is printed with the permission of JamNews. It is part of their Trajectories project, which engages editors and journalists across the South Caucasus to tell stories of people affected by conflict.)