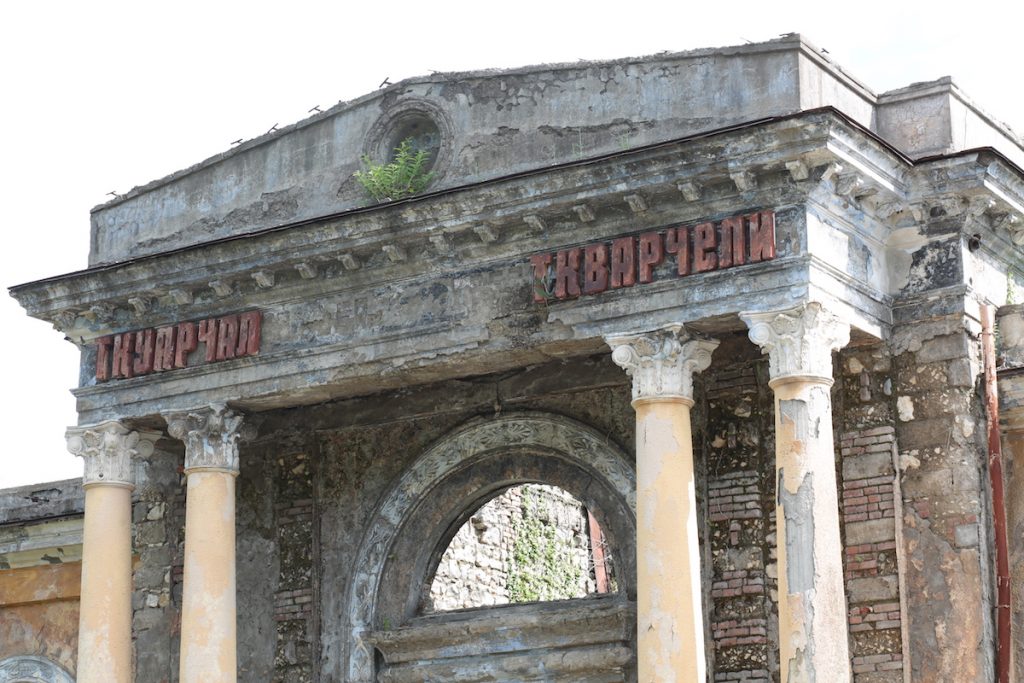 Much of this article was first published by JAM-NEWS.NET

Traces of the 1992-93 Georgian-Abkhaz war are everywhere here. As soon as you enter the city, starting from the industrial zone, on both sides of the road, evoking sadness and despondency, there are the skeletons of destroyed enterprises, sometimes wrapped in abundant subtropical vegetation. Against their background, a newly painted “gold” statue to the miner is a monument to the foregone Soviet industrial power of the town.

Throughout the Georgian-Abkhaz war, the city was isolated.

“There were Georgian troops in front, which constantly fired at (the area), behind the mountain—almost no food. Only occasionally food was delivered from the ‘mainland by helicopter. But naturally, it was not enough.  People shared what they had”, says Ibrahim, a gas filler.

During the war, he was in the local militia. “I remember one period, of food at home we had only honey and nothing else. Honey for breakfast, honey for lunch, honey for dinner … At times in this position, I thought more about food than about the enemy’s bullet. The constant feeling of hunger is what I associate with the time of blockade”.

The people’s memories have long been divided into the periods of what happened to the city in Soviet times, during the Georgian-Abkhaz war and what is now.

It is the only town in Abkhazia that is not located in a coastal zone. Mountains completely ring it, and only one road, including the railway, leads to the entrance and exit. At the end of the twentieth century, large deposits of coal were discovered here.

In the Soviet Union, industrialization was going on throughout, so the country’s leadership did not delay industrial development. Within a short time, several mines and processing enterprises were opened in this mountainous area; a railway was built along which Tkuarchal coal was transported. Mainly high-quality anthracite was mined, without which the work of metallurgical plants was impossible.

During World War II, the significance of coal for the USSR increased sharply.

“When the Germans occupied Donbas, the whole burden of supplying coal to industrial enterprises in the rear of the entire south of the country, as well as the Black Sea Fleet, fell on our mines.

Most of the administrative and public buildings and residential buildings in the central part of the town were built by captured German soldiers at the end of the war and in the early post-war years. German architects and engineers participated in the design of the buildings.

The Gothic style combined with the Stalinist Empire style made the town different from all other small towns.

The population in Soviet times was about 30,000 people. Plus, two to three thousand people lived in each of the adjacent mining villages.

“In Dzhantukha, we had all the necessary infrastructure – a cinema, shops, including a bookstore. There was a hairdresser, a savings bank, a dry cleaner.  There was even a police station,” Ibrahim recalls. The shops were well-stocked. People came here from Sukhum and Gagra for scarce goods. The miner’s profession in the Soviet Union was then held in high esteem.”

Today, the town’s former greatness and attention is perceived as a sweet dream.

In the late eighties, with the decline of the Soviet economy, a gradual outflow of the population. And after the Georgian-Abkhaz war, it became widespread.

Today, no more than 5,000 people live in the town. Lack of work is the main problem. The coal mines are abandoned. In the 2000s, a Turkish company started mining coal as a quarry, but it had to curtail its activities for five years already due to the economic crisis.

Of the several factories that worked in the city during the Soviet era, only one is functioning. Then in an extremely limited mode – there is a workshop for the production of Abkhaz “state awards”.

Periodically, the local Abkhaz authorities try to stop the outflow of the population. The House of Culture and the sports and recreation complex were repaired, and the construction of the hospital is now being completed.

Even a swimming pool was planned, but there was not enough money for the project, and the construction has been frozen for ten years.

The city has its own theatre. An amateur created it, but not so long ago, its status was raised, and it became a state theatre. The troupe is small – only fourteen actors. Director Roman Sabua laments the staffing problem:

“We have a shortage of men. Local guys do not want to be actors, they are shy, and a visiting actor cannot be lured here for a small salary.  So when choosing a performance, you have to take into account the realities of personnel.”

While the Abkhaz authorities still somehow have enough resources to support the town, they do not have them at all for the mining villages.

“This is my house, and that one is Kolya Sinyakov’s. True, his house has only two entrances, and I have three,” jokes local Vova Bargandzhia, pointing at the empty window panes.

Vova Bargandzhia is one of the last residents of the mining village of Dzhantukh.

Vova’s house was built in the Gothic style by German prisoners of war.  It is built soundly from hewn stone.  The walls are almost a meter thick.  According to him, it can stand for several centuries “if the roof does not fail.”

Periodically, he patches the roof, but cosmetic repairs alone are no longer enough. The roof is completely leaky and requires a major replacement.

“I have a closet in this apartment. Once upon a time, our teacher Vera Pavlovna lived here. And I use this apartment for guests,” Vova says, conducting a tour of his ‘rooms.’  “None of the apartments in the village is key-locked – there is no need. People live very poorly. Besides, there are very few of them.”

There are only eight families left in Dzhantukha. If everything goes as it is now, there will be no one left in the village in ten years. There is absolutely no infrastructure here. There is no school, no first-aid post, not even a seedy kiosk.  For bread, one has to drive along the bumpy road to Tkuarchal/Tkvarcheli. And that’s ten kilometres away.

Vova Bargandzhia works as a guard at the administrative building of the closed Turkish coal mining company.  His salary is 15,000 rubles. He says that he was lucky.

Other residents of the village mainly live on subsistence farming.  Almost all are hunters. You don’t have to go far for prey – wild boars and bears sometimes come here themselves.

The local population hopes to preserve the town and villages. Not by the reanimation of industry, but with tourism. In recent years, this region has been promoted by Russian bloggers. Many of them are delighted with the assortment of abandoned palaces and factory ruins drowned in greenery.

In addition, some beautiful waterfalls and gorges serve as an additional attraction for Russian tourists. The mass of photos and videos replicated on the Internet became virtually free advertising for Tkuarchal.

The flow of tourists to the region, of course, is not comparable with how many of them come to the famous Abkhaz resorts of Gagra and Pitsunda – there is only one mini-hotel and several excursion groups a day – but for the residents who are not spoiled by this kind of attention, this is already something.

“In a day, it happens that a hundred cars with tourists pass here. They will definitely stop and buy honey or dogwood compote,” says Nonna Berzenia about the scale of tourist interest. Her small stand selling twists (homemade canned food in glass jars) is the only one in the area.

It is located in the village of Akarmara at a fork in the road leading to two waterfalls. Nonna has three daughters.  They are all married and live in Sukhumi.  They periodically visit their mother, who does not want to go anywhere, for she believes that sooner or later life will improve here.