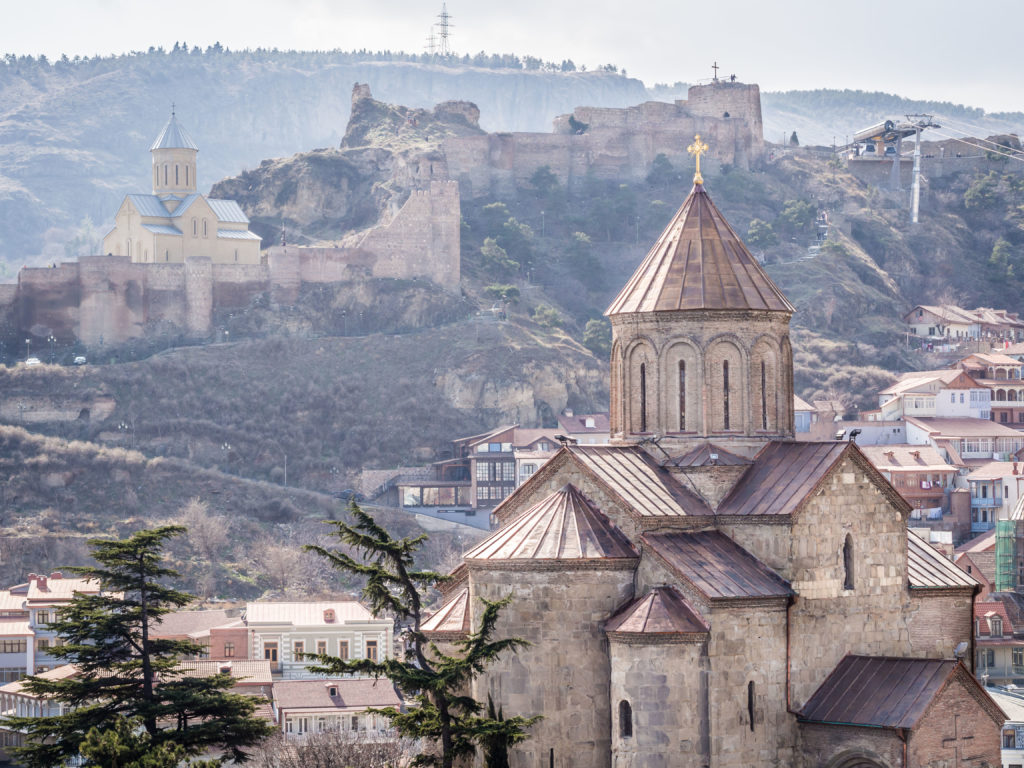 A fairly broad range of views was stated on the implications of the recent Nagorno-Karabakh war and its impact on the South Caucasus regional landscape. Our aim is to again address some consequences from Tbilisi’s standpoint by sharing some personal thoughts with respect to various aspects of the post-Karabakh conundrum, including those in relation to transport infrastructure, prospects for tri-partite format for Azerbaijan, Georgia and Armenia as well as touching on the interaction of the regional powers when it comes to certain regional dynamics.

AXIS OF THE ISSUE

Georgia’s main political vectors in the South Caucasus are cooperation for peace and stability as well as maintaining good neighbourly relations with Armenia and Azerbaijan—an approach that became even more prominent during the so-called “Second Karabakh War”.

More precisely, we refer to the statement that Georgia’s national security council made on the 3rd of October 2020, in which the Georgian side convincingly underlined the need to immediately bring to an end the “hot” phase of the conflict.

The Georgian government took specific measures: it stopped granting permission for military goods to transit through Georgian territory towards Azerbaijan and Armenia, and it offered Tbilisi as a neutral location for negotiations between the two.

Regarding the statement mentioned above, we would distinguish two principal issues: 1. Georgia not only demonstrated its attitude towards the conflict but also expressed the country’s readiness to participate in the process of normalizing the situation in the region. 2. In this statement, Georgia’s government distinctly explained the importance to the country’s two largest ethnic minorities of maintaining stability and order.

The National Security Council’s statement and Georgia’s policy towards conflicts, in general, could be summed up as: Tbilisi acted according to the conditions defined by the current reality in the region and was using the full extent of its abilities due to this reality.

When talking about a possible Georgian component in efforts to normalise the Karabakh conflict, it is noteworthy that in different mass media the question of the quality of Tbilisi’s coordination with Western partners has been considered more than once. On this topic, we would like to mention that any similar kind of coordination or communication is undertaken by Georgia could only be defined by the reality of the current situation in the region and by Georgia’s possibilities.

However, when discussing this specific topic it is important to clearly realise that Georgia’s coordination with the West over issues linked to the South Caucasus should not depend solely upon the dynamics of the Nagorno-Karabakh conflict.

It is important to remember that the partnership between Georgia and the West originally began as early as during the second half of the 1990s when large transport projects (such as the Baku-Tbilisi-Ceyhan and South Caucasus gas pipelines) were initiated.

Besides this aspect, another relevant issue for further discussion is the objective evaluation of how strong Western interests and influence are in the South Caucasus. Accordingly, when we talk about Tbilisi’s efforts to strengthen these interests we should deliberately underline the fact that the efforts of our Western partners are just as (if not even more) vitally important for any kind of cooperation or coordination in the South Caucasus.

THE TRANSPORT COMPONENT OF THE CEASE-FIRE AGREEMENT

The 10th of November 2020 agreement over Nagorno-Karabakh and subsequent documents call for new transport corridors on the territory of Azerbaijan and Armenia.

Without going into too much detail regarding these projects, in this article, we shall discuss whether or not these projects pose any kind of risk to Georgia’s potential for transport and transit.

There have been some pessimistic evaluations, but we believe that this pessimism is to some extent exaggerated when it comes to the potential weakening of Georgian corridors. More precisely, we would argue that:

We will pay attention to certain aspects: transport corridors going through Georgia, through active maritime ports, ensuring the passage of goods to the Black Sea region. An intermodal system such as this, in terms of investments, is no less important since it has a direct impact on the economic component of freight transportation. Finally, one must also mention the two most important elements of the attractiveness of transit corridors passing through Georgia. The first of these is Georgia’s political system itself, which although far from ideal possesses indisputable advantages in terms of doing business thanks to the transparency, simplicity and legibility of Georgian legislation. In addition to this, what should also be taken into consideration in the big picture is the high level of Georgia’s integration with Western markets compared to its South Caucasian neighbours. And it could even be asserted that such a steady political and economic integration with Western partners is an important question not only for Georgia but would also be in the interests of Baku and Yerevan.

A FACTOR OF REGIONAL POWER

Obviously, the first interesting question is Russia and Turkey’s roles in the Karabakh conflict, and the Russian factor, in this case, is a very specific one. Since Russia and Armenia maintain close relations through various agreements—whereas Moscow’s links to Azerbaijan follow a more cooperational format—Russia was obliged to maintain a very delicate balance between the two. Basically, neither of the parties to the conflict was “hostile” towards Russia, and Moscow’s actions should therefore have been more weighted and complex compared to other conflicts and wars in the post-Soviet space. It was this specific factor that supposedly defined a certain number of “flexible” formulations that were included in the ceasefire agreement and were mentioned above.

Another defining and extremely important aspect should also be mentioned: the dyophysite or perhaps even “triphysite” factor of Moscow’s involvement in the conflict. What is implied here is the general background of Russia-Turkey relations which intersect not only in the South Caucasus but in other points around the world as well.

Despite Moscow’s tactical interests in cooperating with Ankara, Russia did its best to limit Turkey’s role in the post-conflict period. For example, the agreement of the 10th of November 2020 tries to limit Turkey’s military element in monitoring the ceasefire agreement. Russia also tried hard to neutralize Turkey’s attempts to widen its role in the Minsk format (as well as those of Azerbaijan).

And let us now use Georgia’s point of view in order to briefly discuss what attitude Turkey can have towards this issue. Firstly, Turkey is one of Georgia’s main partners. Secondly, Ankara plays a significant role in issues of regional safety and consistently and openly supports Georgia’s NATO membership ambitions.

What is also defined in the context of this issue is the presumed specificity of Georgia-Turkey relations with regards to limiting the spread of Russia’s influence in the South Caucasus. Here we should also mention Ankara’s desire to further deepen the country’s partnership with Azerbaijan as well as Turkey’s practical interests in stabilizing relations with Yerevan.

THE SOUTH CAUCASUS AS A TRILATERAL FORMAT?

It is not even worth asking what benefits any format of trilateral cooperation would bring to the countries of the South Caucasus. Besides questions of peace and safety, such a partnership within the framework of the emerging new world order would give the Caucasus qualitatively different characteristics and would make the region more interesting and appealing to investments. Unfortunately, the reality of the current situation in the short and medium-term does not give much cause for optimism. Overall, the paradigm of the South Caucasus is mostly limited to bilateral relations between Georgia and Armenia and Georgia and Azerbaijan.

Based on that, the quality of cooperation among the South Caucasian triangle is in the foreseeable future defined by the quality of cooperation between Tbilisi and Yerevan and Tbilisi and Baku. We must at this stage repeat that this is the current state of the region’s “real politics” and that there seems to be little chance of this reality changing any time soon. These conditions underline Georgia’s most important role as a potential pillar of the South Caucasus’s overall economic space. Consequently, the results of the country’s internal reforms are becoming as important as the quality of Georgia’s integration with international civilized society.

To discuss processes in the region in the near and medium-term, many key issues need to be accumulated. The answers to some questions are slowly taking shape with more or less clarity, and some might be made the subject of hypothetical modelling—at this stage, at any rate, and taking existing conditions into consideration.

For example, the quality and durability of Russia and Turkey’s current geopolitical cohabitation in the South Caucasus is questionable, particularly as the two countries come into contact in other parts of the world as well. We cannot exclude that in the so-called arrangement of priorities the South Caucasus might turn into an essential component of modern mutual compromises.

The basic challenge of the overall task remains the role of the West in the South Caucasus and the projection of Western interests. An unequivocal answer must be found to this question at this stage, especially given the noticeable deficit of clear geopolitical Western lines with regard to the Black Sea region—one of whose natural components we believe the South Caucasus to be. The most compelling factor of the overall Western vector is the United States of America, whereas globally Washington’s recent zig-zag geopolitical signature unintentionally helps to create the above-mentioned problem.

Another very important issue is the overall framework of the new world order that is currently being formed. We believe that there are two fundamental trends that define its basic nature: the first of these is the counterweight parameter between the US and China as well as how it is reflected on different geopolitical geographies. Second, in our opinion, the novel understanding of this new world order’s multilateral characteristics as well as bringing regionalism to the fore. From this point of view, the geopolitical geography of the Black Sea and the Caspian Sea—along with the South Caucasus lying in between—are being established as an important regional centre of this new world order.

To complete this analysis I would have named the South Caucasus and the Middle East as closely linked issues. Despite differences on the surface, it is a fact that a number of measurable factors are leading these two regions’ geopolitics to increasingly merge.

Of course, the above-mentioned questions imply several subsidiary questions and a certain depth of inquiry. We only mentioned those basic lines of thought that will become fields for endless research by analysts over the coming years and will become routine responses for policymakers.

THE FACT IS THAT…

The South Caucasus is once again at the centre of global attention, while the modern structure of relationships between the countries of the region has evolved over the past few years from a bilateral model to a more complex multi-layered system. In any case, the collapse of the Soviet Union left a legacy that the three countries of the region are still trying to overcome. Also, it is important to note that the so-called “ethnic conflicts” are primarily related to the shifting sands of geopolitics in the region. The latter point is especially true when speaking about the conflicts in Georgia, whose reduction to the category of “ethnicity” reflects either a lack of knowledge or an attempt to distort their essence.

As a result, the Caucasian puzzle raises more questions than it provides answers—which is hardly surprising since the region’s importance goes beyond its boundaries and since the diversity of the Caucasus is truly a contributor to the grand design of Eurasian security. In addition to a general toolkit, the South Caucasus is a region that also requires a very tailor-made approach.