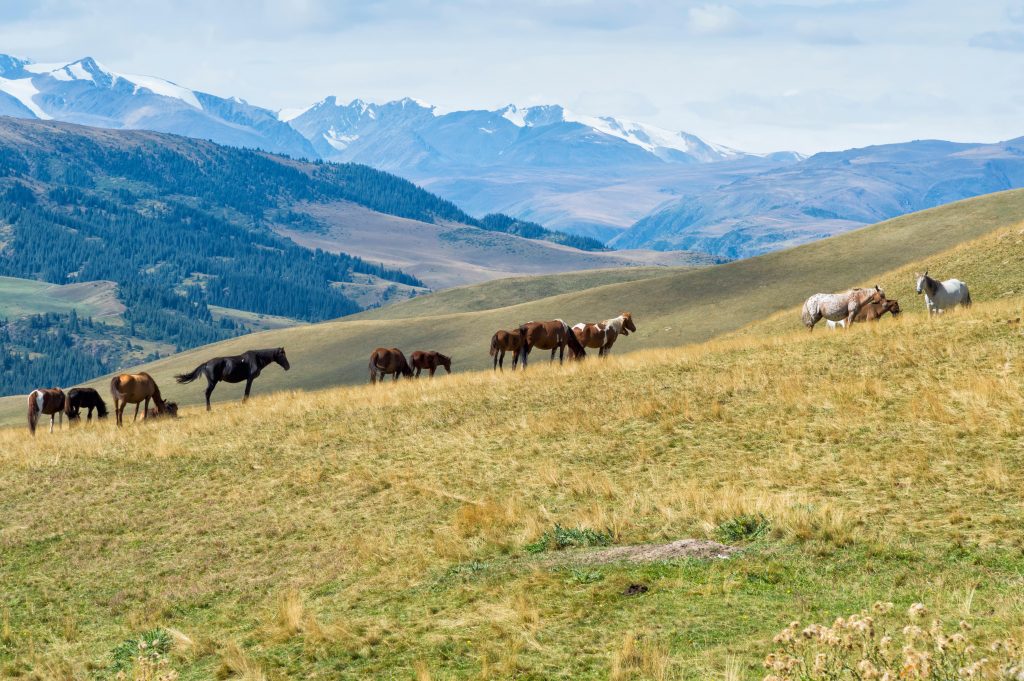 Situated only 40 km south of the commercial and cultural capital of Kazakhstan, Almaty, Ile-Alatau National Park is the perfect place to escape from the hustle and bustle of the city either for a day or for an extended trip. The 2,000 sq km park is almost untouched by the advances of civilisation and contains a wealth of differing habitats from woodlands to Alpine meadows, glaciers and meltwater lakes.

The park is home to around 300 species of birds and animals, including snow leopards, the Central Asian lynx, Tian Shan brown bears, Central Asian stone martens, Siberian ibexes, bearded vultures, and golden eagles. The park also protects a specific species of deer whose antlers are believed to have medicinal properties. You can also find apricot, maple, currant, and apple trees. The national park is thought to possess the genetic root of all known varieties of apple trees in the world.

Located in the park are burial mounds of the Early Iron Age, the Saka burial mounds, and medieval settlements. Along the spurs of the Trans-Ili Alatau lies an ancient road, along which tribes and peoples moved in the distant past, and later the great Silk Road. The wealth and beauty of nature, monuments and objects of natural, cultural, and historical heritage attract thousands of tourists to the national park where they can take part in activities such as hiking, camping, cycling, rock climbing, skiing, rafting, and horse riding.

The park entrance is around 45 minutes from the centre of Almaty. You can either hire a car, take a taxi for 10 euros, or take bus number 12 from Dostuk Avenue which runs from 6 am till 11.30 pm for less than a euro.

In the foothills, the average January temperature is -7.4°С, and 23°С in July. In the Maloalmatinsky gorge (Medeu tract), at an altitude of 1530 m, the temperature in January is -4.3°C and 18.1°C in July. For winter travellers, there is the Shumbulak ski resort, but if you prefer to see a wide variety of nature and go hiking with the option of camping, then summer is the best time of year to visit.

The Big Almaty Lake, known as BAO in Russian and Zhasylkol in Kazakh, which translates to a big blue lake, is probably the most famous site within the national park. It is located at an altitude of 2,500 metres and was formed from the movement of an ancient glacier. It is 1.6 km long and 40 metres deep. Depending on the time of year and the weather, the lake changes colour from pale green to turquoise blue.

The lake is located within the Kok Zhailau plateau, in the Kazakh language it means “the green pasture” and it lies between the big and small Almaty gorges. Previously, this area served as a pasture for animals, but today it mostly serves locals and tourists as a recreational area where visitors can have a picnic and enjoy the breathtaking views. Kok Zhailau plateau is also a popular place for downhill biking, ski touring and climbing.

The Turgen gorge, along with the Turgen river, are considered some of the most picturesque places in the Ile-Alatau National Park. This beautiful, densely forested gorge has been slowly cut out of the rock by the white waters of the Turgen river, which originates from the high mountain glaciers of the Trans- Ili Alatau Mountain Range. In the gorge, you can admire the high mountain peaks, and find alpine meadows, old forests, and several waterfalls. The Medvezhy waterfall, part of the Turgen river, drops off a cliff at a height of 30 metres. Make sure to also visit the Kairak waterfall located on the Bozgul river, a branch of the Turgen. The path to this waterfall is 8 km and may take up to three hours to hike there, but it is worth the trek as it is the largest of the seven waterfalls in the Turgen gorge at 55 metres.

The Assy plateau, a high-altitude summer pasture, is located between the Turgen gorge and the Bartogay reservoir. The Assy-Turgen Observatory is located at the western end of the plateau, and the Assy River flows along the plateau. The Assy observatory is an astronomical observatory standing on the plateau at an altitude of 2,750 metres and was constructed almost 50 years ago. The observatory is located in an ideal astro climate with a highly transparent atmosphere and no light pollution. The plateau has a lot of pure nature and is filled with fresh green grass during the spring and summer periods. It is a great place to hike and along the Assy river, there is a yurt camp where they provide meals.

Medeu ice skating rink is the highest in the world, sitting at 1,691 metres above sea level. It is named after the entrepreneur Medeu Pusurmanov who first explored the picturesque nature in the foothills of the Trans-Alatau Mountain Range. The ice of the rink is made from the clearest mountain water of the Malaya Almatinka River. Before the Medeu ice rink was built, most ice-skating competitions in the USSR were held in Siberia, where the long winter seasons provided good conditions for training. The head coach of the Soviet national team noticed an interesting coincidence – the Kazakh athletes, especially those from Almaty, showed much better results than other skaters during competitions. The Almaty skaters claimed the ice in the mountains surrounding the city was “faster”. A special commission from Moscow chose the Medeu gorge and its flat plateau as the perfect place to build their rink. On February 5, 1951, the opening day of Medeu, two world records were set. On this rink, the USSR national team became leaders in speed skating, figure skating and ice hockey. Today this legendary skating rink not only attracts professional athletes and hosts large scale sports events but is also extremely popular amongst ordinary skating enthusiasts and tourists alike.