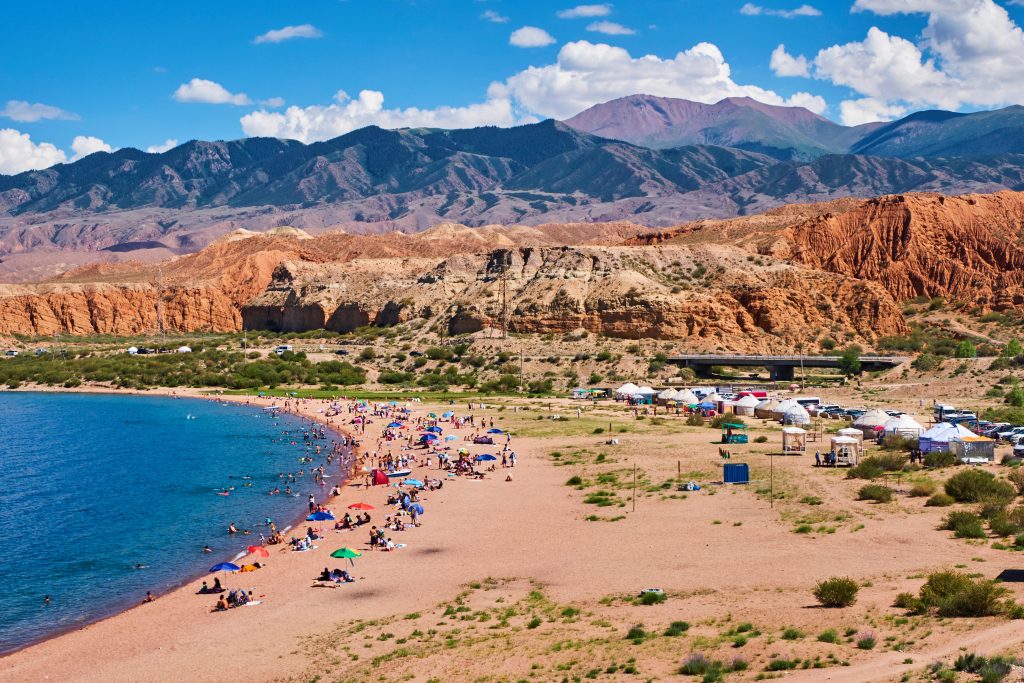 Issyk-Kul is the seventh-deepest lake in the world and the second-largest saline lake after the Caspian Sea. The sheer size of Issyk-Kul makes it seem far more like a sea than a lake. Perched at an altitude of 1,609 m, Issyk-Kul is one of the largest high mountain lakes in the world. In the Kyrgyz language, Issyk-Kul means hot lake as it never freezes, even in the winter, due to the high volume of salt. The Issyk-Kul State Reserve was established in 1948 to protect the lake and the surrounding area’s unique landscape and in 2000 the area was put on the UNESCO World Network of Biosphere Reserves.

The lake and the surrounding area were under the rule of the Qing Dynasty of China and ceded to Russia after the Treaty of Tarbagatai in 1864. Issyk-Kul Lake was a stopover on the Silk Road, a land route for travellers from the Far East to Europe. Many historians believe Issyk-Kul Lake was the point of origin for the Black Death. They believe the lake’s status as a major crossroad for travellers allowed the plague to spread across the Asian and European continents via medieval merchants who unknowingly carried infested rats.

The numerous archaeological sites scattered around the lake are a reminder of the prehistoric and ancient civilisations of the region. In December 2007, a report was released by a team of Kyrgyz historians, led by Vladimir Ploskikh, vice president of the Kyrgyz Academy of Sciences, that archaeologists discovered the remains of a 2500-year-old advanced civilisation at the bottom of the lake.

There are many legends surrounding the lake — according to one, the great conqueror Tamerlane ordered his warriors to place a stone in the lake every time they passed Issyk-Kul. So many warriors carried out Tamerlane’s order that the stones created a stone ridge called Santash, located on the eastern side of the lake. Another legend is that Genghis Khan, whose tomb’s location is unknown, is actually buried beside Issyk-Kul Lake.

During Soviet times, Lake Issyk-Kul was promoted as a holiday resort, with numerous sanitoriums, hotels, dachas and tourist infrastructure built along its northern shore, many concentrated in and around Cholpon-Ata and Bosteri. The eastern part of the lake hosted a Soviet Navy facility which was used as a torpedo testing site, making the region forbidden to foreigners for some time. Now the entire lake is open to locals and tourists alike to enjoy.

How to get there: Issyk-Kul International Airport operates during the summer months. It is possible to fly there from Bishkek, Jalal-Abad, Osh, Almaty, Novosibirsk, and Tashkent. It is also easy to hire a car and drive from the capital Bishkek —  the road around the lake is smooth and well maintained. If you want to save money you can catch a bus from Bishkek to Cholpon-Ata, Issyk-Kul for 330 soms (€3.50). Manas International Airport, Bishkek, has regular flights from many Central Asian and Russian cities as well as from Delhi, Dubai, Kuwait City and Istanbul.

Time of year to visit:  The beach tourism season lasts from mid-June to the end of August, when temperatures sit between 25-27C.

Documents: Travel to Kyrgyzstan is visa-ree for 69 countries, including all EU countries and the U.S. and UK.

The beaches on the north shore of the lake are packed in the summer with Russian and Kazakh tourists staying in all-inclusive resorts. If you would prefer to stay somewhere more authentically Kyrgyz with quiet beaches, Tosor or Tamchy are the best options. The beaches there are deserted, the water is clear, with sometimes up to 20 metres of visibility, and the sand is soft. The mysteries and legends surrounding the lake will appeal to those who love diving as in Issyk-Kul you can not only enjoy the beauty of the underwater world of the lake, but also feel like a real explorer discovering the flooded city below. Salty Lake, on the south shore, is well-known for its very salty waters and like the Dead Sea, people come to float and use the water for medicinal purposes.

For those travellers who do not want to spend the whole day on the beach and want to explore the historical and cultural side of Issyk-Kul, there are many other options. Both Cholpon-Ata and Karakol have museums displaying artifacts that tell the history of Issyk-Kul. In the winter, Karakol is famous for its ski resorts and in warmer weather you can admire the Holy Trinity Cathedral, a classic example of a Russian Orthodox Church of the late nineteenth century. Another gem is the Dungan Mosque built by a Chinese architect and craftsmen in the early twentieth century. It is made from wood without a single nail. The architectural design and paintings inside are incredible. Bokonbaevo is the biggest town on the southern shore of Issyk-Kul — there you can enjoy the traditional eagle hunting and the crafts cooperative. Cholpon-Ata boasts the Issyk Kul State Museum, an open-air gallery of petroglyphs dating back nearly 3,000 years and the Rukh Ordo, which translates to “spiritual centre”, and contains five temples dedicated to each of the world’s main religions.

On the southern shore of Issyk-Kul Lake is Barskoon Gorge, famous for its stunning waterfalls with unique names, such as ‘Tears of the Leopard,’ ‘White Beard,’ ‘Splashes of Champagne,’ and ‘The Bowl of Manas’. In 1965, Yuri Gagarin visited this place and two monuments were later installed in his memory.

Near Karakol, at the eastern end of the lake there are the red sandstone cliffs of Jeti-Oguz, or The Seven Bulls, which attract many visitors. Since it is well visited during the day, it’s recommended that you visit early in the morning or at sunset when the light makes the cliffs appear to glow red.

Another popular site is the impressive natural phenomenon, the Skazka or Fairy Tale Canyon, located 8 km from the village of Tosor on the southern shore of the lake. Entry to the site costs 50 soms per person. Along this canyon, there are some beautiful hikes among the red sandstone cliffs. Water, wind, and sun have produced whimsical, fabulous shapes here. The cliffs resemble mythical creatures like dragon ridge. Others look like animals, such as camels, hippos, and elephants. Some of the cliffs portray intricate structures such as castles, towers and even the Great Wall of China.