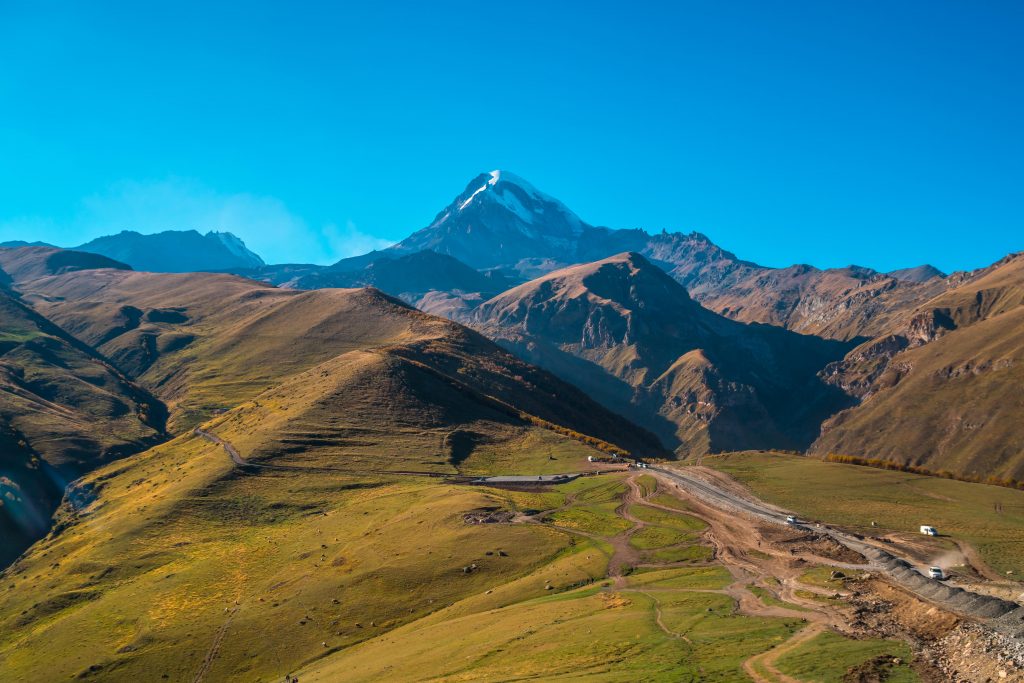 Kazbegi, officially known as Stepantsminda, is located in the Mtskheta-Mtianeti region of north-eastern Georgia, known for its alpine meadows and forests. The town was officially renamed Stepantsminda in 2006 after a Georgian Orthodox monk named Stephan, who constructed a hermitage at the location on what would later become the Georgian Military Road. The area surrounding Kazbegi is known for its scenic location in the Greater Caucasus mountains and is a hub for hikers and mountain climbers.

At 5,047 metres above sea level, Kazbegi Mountain or Mkinvartsveri which means ‘Glacier Peak’, is the third highest mountain in Georgia.  Among locals, the mountain is nicknamed The Bride because the mountain ‘face’ is often hidden behind a veil of fog. Kazbegi mountain is surrounded by myths and religious traditions. According to Greek mythology, as punishment for teaching mankind how to make fire, the Titan Prometheus was chained to a mountainside in the Caucasus for all eternity. Georgian folklore claims it was the icy slopes of Kazbegi to which he was chained.

Kazbegi has always served as a strategically important gateway as it is the location of only one of two major routes connecting countries north and south of the Caucasus mountains, the other being the Derbent route in Russia, which bypasses the mountains from the east. This road has been used since antiquity by merchants and invaders alike – everyone wanted to control the famous Dariali pass known as “the key to the Caucasus”. This led to the greater development of the region and the construction of several beautiful churches and fortresses which can still be seen today. Kazbegi is an extremely popular destination both among foreign tourists and Tbilisians due to it being accessible all year round. Kazbegi should be your first taste of the Georgian countryside.

The distance between Tbilisi and Kazbegi is 155 kmn — the two places are linked by a single road, the Georgian Military Highway bridging the most scenic, high-altitude stretch. On average it takes 3-4 hours to travel between Tbilisi and Kazbegi by road depending on the vehicle, traffic, and weather conditions. The cheapest way to get to Kazbegi is by marshrutka. They depart from Didube station from 8 am until late afternoon. It costs 3 euros and takes three to four hours. If you can afford a more comfortable trip, then GoTrip allows you to book a car and a driver for the full day who can stop at any important sites along the way. Prices start from 32 euros. Tbilisi international airport is located 17 km southeast of the city centre. The airport mainly serves destinations in Europe and the Middle East.

The best time to visit Kazbegi is in late spring and summer. July and August are peak tourist seasons, temperatures are still relatively mild, with average highs during the day of 22 degrees Celsius. Summer months are far less rainy, and the days are longer, which makes summer the best time for hiking.

Nationals of 93 countries and territories may visit Georgia without a visa for a year, including all EU countries, the U.S. and U.K.

The most famous attraction in the Kazbegi area is the Gergeti Church, an architectural complex from the 14th century located 6 km from Kazbegi town, 2,200 metres above sea level. The complex includes the Holy Trinity Cathedral and a bell tower built in the 14th century, and clergy houses from the 15th century. A hike from Kazbegi to the church, through a picturesque valley, takes around two hours to complete. If you would prefer not to walk, you can take a taxi or even a horse. In Kazbegi town, there is a historic museum located in the memorial house of the Georgian writer Alexander Kazbegi (1848-1890). Together with the library and personal belongings of the writer, the museum houses ethnographic artifacts typical of the Khevi region; archaeological exhibits; religious relics; books, and various works from local artists.

The village of Gveleti, 7 km from Kazbegi, is accessible through the stunning Dariali Gorge, from which a short, leisurely hike up a narrow footpath leads the way to the Gveleti waterfall. Gveleti means “place of snakes” in Georgian, so keep an eye out for local wildlife. There are two waterfalls, the smaller of the waterfalls is a bit more hidden and therefore less busy. Try and time your hike here for a late morning when the sun lights up the valley. If you continue to walk along the hiking path you will eventually reach the Devdoraki Glacier. Also located in the Dariali gorge is the Archangel Monastery Complex nestled beneath the mountains on the eastern side of the river gorge. It is absolutely magnificent and very close to the Russian border.

The quirkiest attraction in Kazbegi is the ‘open-air sculpture museum’ located at the entrance to Sno village on the way to Juta, south-east of Kazbegi. Half a dozen gigantic stone heads dot the landscape, each carved in the image of a great Georgian writer, poet or leader. Continue into Sno, cross the river and you will arrive at the remains of Sno Castle. This 16th-century castle sits atop a rocky outcrop which you can scramble up for closer inspection.

Truso Valley is another gorge with stunning wild landscapes and colourful springs. One option is to hike from Kvemo Okrokano village to the impressive Zakagori Fortress, which sits on the border with Ossetia. Whilst not big in elevation gain, it’s a long hike of 22km. Pansheti mineral pools are located 2.5 km south of Kazbegi centre on the western side of the river. This open-air ‘swimming pool’ is fed by natural mineral springs. The water is cold, crystal clear and clean, while the mountain backdrop is simply stunning. The pools are a 30–40-minute walk from the centre of Kazbegi via a flat path that follows the river. Alternatively, you can take a taxi and get there in 5 minutes.