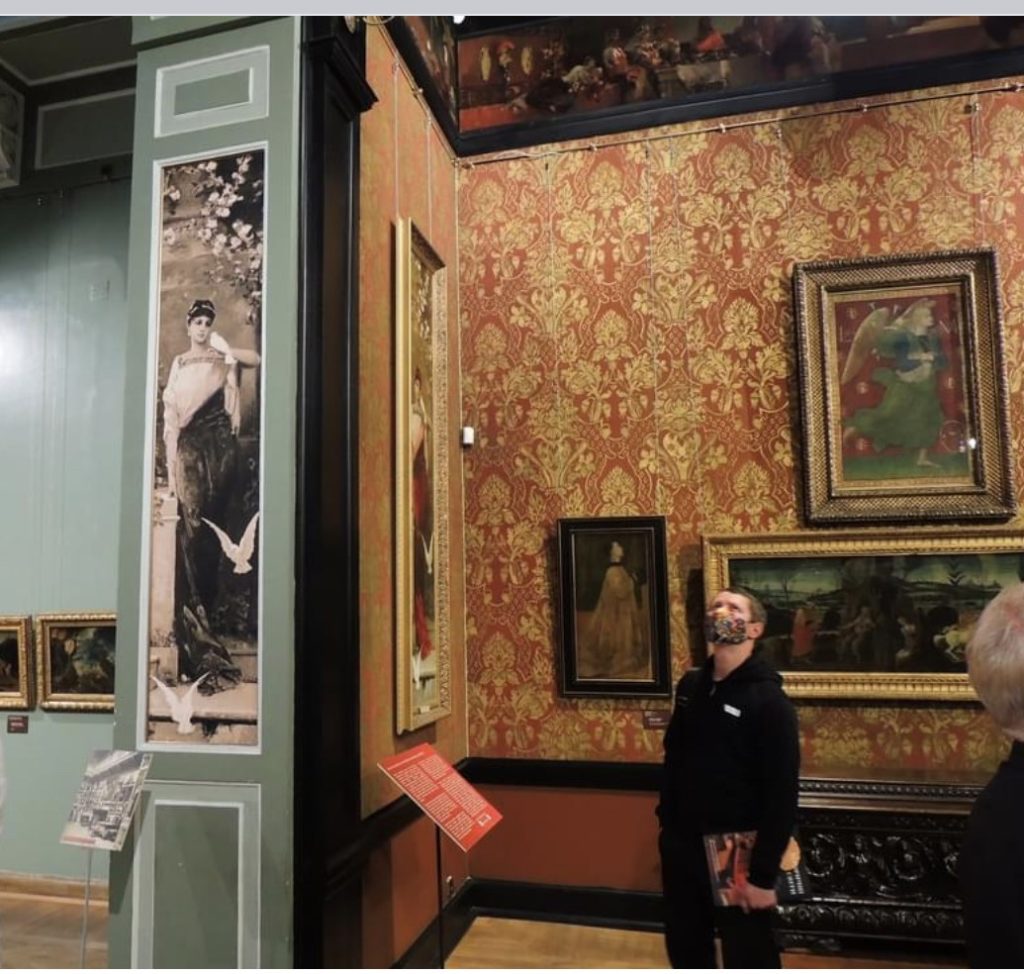 Wilhelm Kotarbinski, a Polish artist who skirted a line between the symbolist and art nouveau movements, may have been overshadowed by more prolific painters in the late 19th and early 20th century. But 100 years after his death, his work is more prominent than ever. Now, it is being exhibited in Kyiv as a part of the new identity of the city that he called home for much of his life.

His name and works, many long overlooked or forgotten, grace well-known and well-loved parts of the city: displayed in one of the city’s most important Orthodox cathedrals, linked to a street loved by artists and strolling families alike, and hung in its most prestigious art galleries.

The son of a Polish nobleman who had fallen on hard times, he spent the first half of his life in Italy, absorbing classical and Egyptian themes into his work – and receding into relative obscurity as his peers seized the limelight – like academic artist Hans Makart or symbolists Gustav Klimt in the West and Russian Mikhail Vrubel in the East.

It was when he moved to Kyiv that his work took on more fantastical, Symbolist elements: reclining maidens, floating on water or in courtyards – but others with almost demonic undertones and depictions of the afterlife.

“Wilhelm Kotarbinski, like Henryk Siemiradzki, or Stefan Bakalowicz, was long considered a ‘forgotten artist’,” Oleksandra Pelikhovska, guest editor of the new anniversary volume of art journal ‘Antikvar’ (‘Antiquarian’), with a special focus on Kotarbinski, told the Tribune. She was referring to two of the painter’s Polish contemporaries.

“However, unlike Siemiradzki, no archives remain … His story is in many ways a detective story, which has been very interesting and fruitful to unravel.”

Indeed, he has been shrouded in relative mystery up until this point, with Pelikhovska being one of the few people working specifically on his biography.

“Late academic painting in eastern Europe and the lands of the former Russian Empire has only begun to be actively studied by researchers in the last few decades,” she said.

One such enthusiast was Maryna Drobotiuk, a researcher at the National Art Museum of Ukraine.

“When I began to study the life and work of Wilhelm Kotarbinski (in 2008), he was relatively unknown to the general public,” she told the Tribune. “I had to collect isolated archival materials, memories of the artist, etc. It was very interesting and exciting. Over time, more people became interested in Kotarbinski’s work.”

Alongside the new edition of Antikvar, a new exhibition recently opened in Kyiv, commemorating the painter’s life and works.

One of Kyiv’s most prominent art museums, the Khanenko Museum, is marking his death on 4th September 1921 by showing:  “Historic worlds. To the 100th anniversary of the memory of Wilhelm Kotarbinski.”

Assembling the event took a significant amount of time, especially given his relative obscurity and how widely dispersed some of his works are.

“The idea of an exhibition-research project dedicated to Wilhelm Kotarbinski’s interiors, which includes 26 independent paintings, organically fused into the decor of the hall of the Khanenko Museum, has long since been in the works,” said Oleksandra Sakorska, Senior Research Fellow at the Khanenko Museum and the exhibition’s curator.

“As I researched the interior decor of the Khanenko Museum for more than three years, I can state that Vrubel’s paintings, along with the works of artist Wilhelm Kotarbinski, place the Khanenko mansion on a par with European art monuments, both in architectural construction and décor.”

New exhibition with works in their “natural environment”

To mark the occasion, the museum procured two panels that had originally been designed for the museum’s ‘Red Drawing Room’ – but which had since been acquired by a different gallery.

For the first time since 1930, “the artworks could be enthusiastically viewed in the natural environment for which they were originally created,” added Pelikhovska.

“Kotarbinski had to ‘insert’ his historical stories on the walls in a specific frieze format, which had certain limitations and was also interrupted in several places by decorative elements that were part of the entranceways’ features,” Antikvar noted.

His interior decorations were a means by which to escape reality even while inhabiting it, theorised Myroslava M. Mudrak, Professor Emeritus of Art History at Ohio State University.

“His work represents a predilection that affected artists of various nationalities to define an era filled with anxiety,” she told the Tribune. “The ‘abstraction’ of the decorative arts served as a way of entering into a different, creative realm and many Symbolists involved themselves in decorating interiors as if to create a world apart from reality itself.”

Symbolism, Mudrak said, “as an orientation in modern Ukrainian art is a sorely understudied subject.”

And the more the younger generation of Ukrainians can get involved, the better.

In the same room is a ceiling painted by Kotarbinski – but it is far from the only one in the Ukrainian capital. It was difficult to procure both information and the artworks themselves as the project ended up spanning Russia, Poland, and Ukraine.

“Materials about Kotarbinski are hard to find. All the more reason to motivate people from five countries to look for them,” Pelikhovska said.

Kotarbinski was responsible for some of the frescoes in one of Kyiv’s most important structures, St. Volodymyr’s Cathedral. And along with some of his contemporaries, including Russians Vrubel, Mikhail Nesterov and Viktor Vasnetsov, he painted bright, gilded seraphims and depicted Jesus in Pontius Pilate’s court. It was this painting that may have served as the inspiration for one scene in Bulgakov’s “The Master and Margarita” – indeed, Bulgakov and Kotarbinski once even resided on the same street –Andriivsky Descent, now frequented by artists, buskers, and families on outings.

But it was in his non-religious work that his talent really shone through. “If religious painting somewhat restrained this artist, then in the custom-made decor of the Khanenko estate he allowed it to unfold fully,” Sakorska said, referring to the buildings commissioned to house the museum by art collector Bohdan Khanenko, Kotarbinski’s contemporary.

Even the way in which he distributed his more “secular” works was unique: he condensed his paintings and sketches into small, monochrome postcards that could be distributed among the more general population: art for the masses. But he was also very active in the more structured Kyiv art scene.

Artist virtually unknown despite the wealth of activity

“Wilhelm Kotarbinski had a huge impact on the city’s scenic environment, exhibition life and cultural development,” noted Pelikhovska. “He was instrumental in founding the Kyiv Society of Art Exhibitions, which until then had not existed in Kyiv, and also took an active part in creating the Kyiv Art and Industry and Science Museum (now the National Art Museum of Ukraine).”

“Even 10 years ago, the artist’s name was known only in professional circles,” Antikvar noted. “Moreover, there was almost no Ukrainian-language literature about him. So only in recent years, thanks to the research of art critics and historians, interest in Kotarbinski began to grow.” After his death, he was buried in the Polish section of Kyiv’s Baikove Cemetery, the city’s most prestigious, though his grave remains remarkably unkempt.

“His name was unjustly forgotten for many years and even his grave in Kyiv was in disrepair. So now this wave of interest is appropriate to restore justice and the memory of the artist who did so much in and for Kyiv,” said Sakorska.

This started to change in 2018, in the aftermath of the mass “Revolution of Dignity”, popularly known as the “Maidan”, which forced Ukraine’s Moscow-friendly President Viktor Yanukovych to flee the country. A campaign was launched to rename city streets previously celebrating the names of Soviet-era personalities.

One of those changes involved giving his name to a street outside the city centre that previously honoured Mykola Kravchenko, a Bolshevik who participated in the 1918 “January Uprising” to capture Kyiv.

While renaming streets was undoubtedly a part of establishing Ukraine’s post-Maiden identity, locals note a possible turn in aesthetic tastes too, especially in terms of looking past the avant-garde art and Soviet architecture that rose to such astronomic global popularity over the past decade.

“New times have birthed a new bourgeoisie with new tastes, and alongside those a certain demand for fragile maidens in antique tunics and Italian courtyards,” Pelikhovska noted in an article on the website kp.ua. “Now, increasingly, Kotarbinski’s works are appearing at exhibitions in museums – restored after emerging from the twilight of the last century.”

Symbolism, Mudrak said, “as an orientation in modern Ukrainian art is a sorely understudied subject.”

And the more the younger generation of post-2014 Ukrainians can get involved, the better. And not just Ukrainians.

“There is nothing ethnically ‘Polish’ or ‘Ukrainian’ about Kotarbinski’s art, rather, his work represents a predilection that affected artists of various nationalities to define an era filled with anxiety,” Mudrak said. “This phenomenon of multi-national liaisons that have influenced Central and East European modernism – be it Polish, Czech, Slovak, Romanian, or Ukrainian – is not unique given the circumstances of imperial dominion over those territories prior to World War I.”