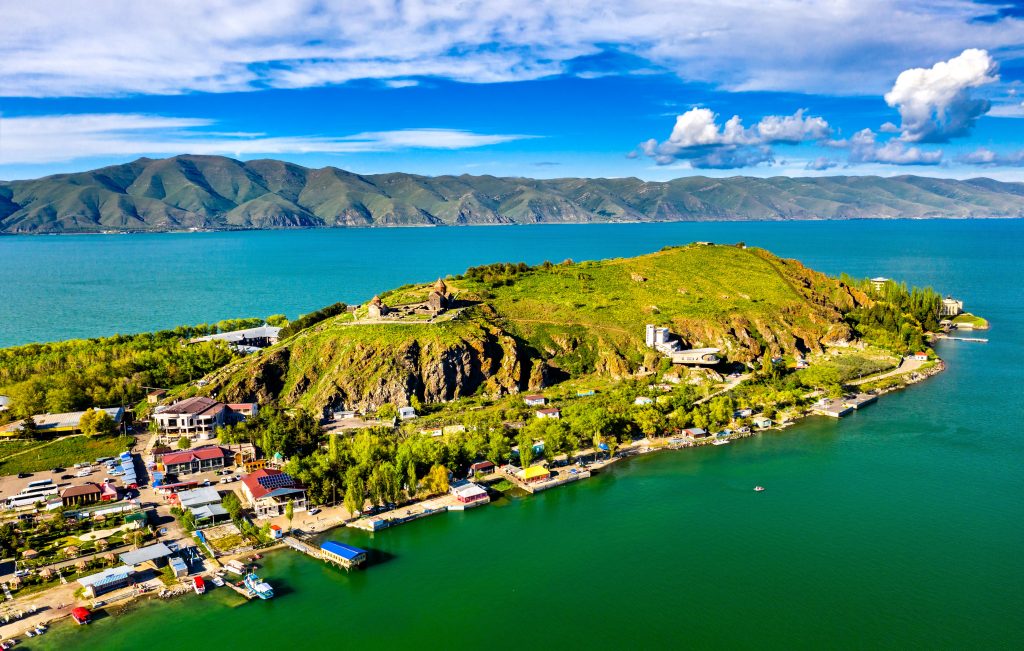 Located 1,900 metres above sea level, Lake Sevan in Armenia is one of the largest lakes in the Caucasus region and covers one-sixth of Armenia’s territory. Lake Sevan is so large that the horizon is barely noticeable. The lake’s colours and shades change with the weather, forming dazzling azure to dark blue hues, and a thousand shades in between. Sevan’s high mountain location means the climate is cooler compared to other places in Armenia. The country’s lack of coast means that the golden, sandy beaches of Lake Sevan are the main summer getaway for Armenians.

Lake Sevan is key to Armenia’s economy as it provides 90 percent of the country’s fish and 80 percent of the crayfish catch. The lake is part of Sevan National Park, established in 1978, which, apart from the lake, includes 24,800 hectares of surrounding land. When Armenia joined the Soviet Union, the government decided to use the lake’s waters for hydroelectricity and irrigation purposes, making the territory of the Monastery of Sevanavank a peninsula.

However, by the 1950s the exploitation of the lake led to lower lake levels, a deterioration in the quality of water, natural habitats were destroyed, and the lake lost most of its biodiversity. The drop uncovered forts, houses and artefacts dating back 2,000 years, but combined with overfishing and sewage dumping, environmentalists declared the lake was on the brink of destruction. The construction of the Arpa–Sevan and Vorotan—Arpa tunnels has reversed some of the destruction and has led to an increase in the lake’s water level. Lake Sevan is expected to return to its original water level by 2029.

There are beaches all around the lake, the most popular part is a 2.5-kilometre stretch on the northern shore, extending northwest from the peninsula. The quieter beaches are found on the eastern side of the lake from Tsovagyugh to Shorzha. Activities on the lake include swimming, sunbathing, jet-skiing, windsurfing, and sailing.

Lake Sevan is very accessible being only 60km from the capital city. The best way to travel is via minibus (marshrutka) from the Northern Bus Station in Yerevan which runs almost every 20 minutes. The marshrutka will take you to the city of Sevan, but you can ask the driver if they can take you to the lake. A ticket to Sevan costs around 500 Armenian dram (one euro). From Sevan, you can take a taxi to the lake for 1000 dram (two euros). You can do the same on the return to Yerevan. To avoid the hassle of public transportation, you can take a taxi for the entire journey from Yerevan to the lake, which will cost around 5,000-6,000 drams (10-12 euros).

In January, the temperature can reach -6°C, and in the summer months, it can reach 16°C. Spring and Summer are the best times to spend an outdoor holiday at Lake Sevan as the higher altitude environment acts as a respite from the heat of the city. By late April and heading into May, Armenia is a lot warmer and drier, with flowers in bloom across the country. This makes late spring a good time for hiking in the mountains and visiting the country’s many monasteries. By June the days tend to be long, balmy, and dry, with brilliant blue skies and green landscapes creating an idyllic setting for hiking and water sports on Lake Sevan.

64 countries can enter Armenia visa-free including all EU countries, the US, the UK, and all post-Soviet states except Turkmenistan.

Sevanavank, a monastic complex, is not only one of the most popular destinations to visit on Lake Sevan but is also one of the most popular places to visit in Armenia so it can be packed in the summer. The peninsula where Sevanavank is located used to be an island when the monastery was founded in the 9th century. The views from the top of the hill at Sevanavank are expansive and spectacular. It is worth visiting this place just for the view alone.

A pagan temple once occupied the site of Sevanavank overlooking the lake but was replaced by a now-ruined church in 305. Two further churches, Surp Astvatsatsin and Surp Arakelots, which make up the monastic complex you can see today were built in the 9th century. An antechamber was added to Surp Astvatsatsin at a later date, but it is now ruined and is filled with khachkars (stone crosses).

Legend states that St Mesrop Mashtots had a vision of 12 figures walking across the lake, who showed him the place to found a church. Queen Mariam, the wife of Vasak of Syunik, built the churches in 874, while Armenia was still under Arab rule. The monasteries were heavily restored in the 17th century. In the 19th century, the monastery was a place to reform criminal monks – there was a strict regime in place and no women were allowed.

If you want to visit somewhere similar to Sevanavank but without the crowds, then the Hayravank monastery located along Lake Sevan is a good option. The monastery dates back to somewhere between the 9th and 12th centuries and sits high on the shores of the lake. The cupola of Hayravank consists of a short octagonal drum, only seen from inside, as well as a short octagonal conical dome decorated with “Harlequin Patterned” stonemasonry. The pattern alternates between a reddish and a lighter greyish coloured tufa. This is considered to be one of the earliest examples of polychrome decorative masonry.

Noratus Cemetery located just off the western shore of Lake Sevan is one of the most photogenic and beautiful places to visit in Armenia. This medieval cemetery is home to the largest collection of khachkars, around 900, and is free to enter. Just walking around the cemetery will give you chills. The oldest surviving khachkars in the Noratus Cemetery date all the way back to the 10th-century. All khachkars face west and therefore are better photographed in the afternoon. If you want to visit Noratus Cemetery with ease, consider taking a tour there. It will give you a really good insight into what you’re looking at and is very affordable.