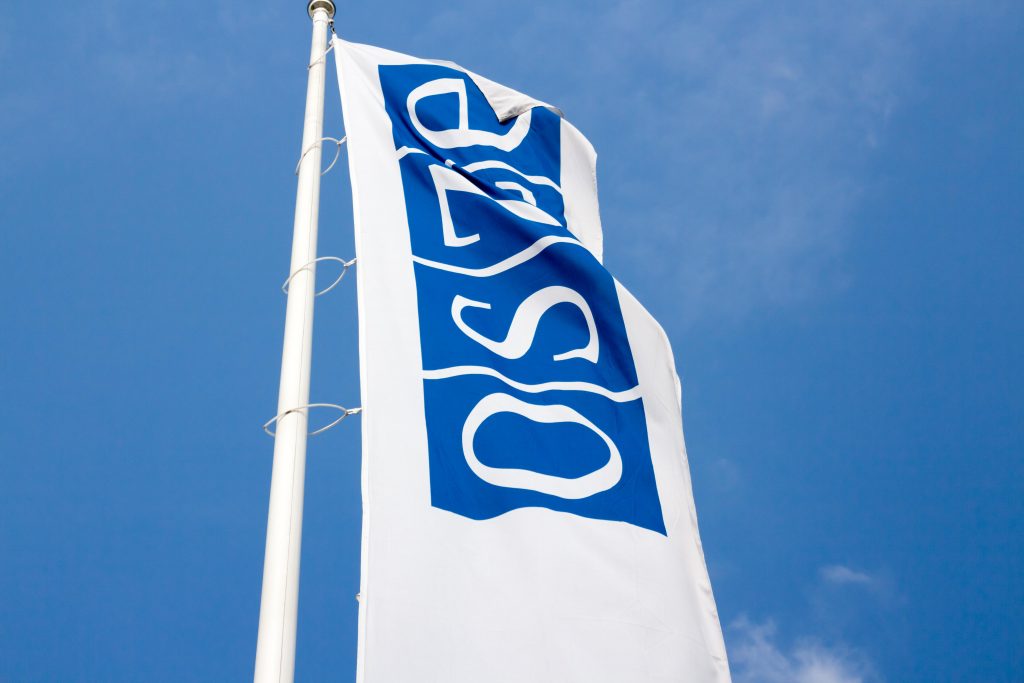 The OSCE flag outside the group's Vienna headquarters

A week of discussions between Russia and Western countries produced few signs of common ground, with Moscow saying its key concerns about NATO expansion went unaddressed and the United States and its European allies vowing to resist any attempt by Moscow to create geographical spheres of influence or dictate terms to its neighbours.

The meetings were held against the background of a buildup of tens of thousands of Russian troops on Ukraine’s borders and Russian calls, in two draft agreements, for the West to provide “security guarantees”. The chief notion there was that the Atlantic alliance would make no further eastward expansion to include Ukraine or the fellow ex-Soviet state Georgia, a notion NATO rejects as a denial of the right of all nations to choose their alliance partners.

The talks took place in three European cities and while each side acknowledged that the other had taken care to listen, neither side appeared ready to give any ground on matters of fundamental importance to the other.

And although Moscow offered assurances at one of the meetings that it had no intention of staging an incursion into Ukraine, top Russian officials concluded there was little point in meeting anytime soon to have essentially the same conversation.

The final meeting on Thursday at the headquarters of the 57-nation Organisation for Security and Cooperation in Europe – with lower diplomatic representation – ended with Russia saying the main issues it submitted to Western countries last month received no formal response and Western countries standing on familiar ground in rejecting “ultimatums” and “blackmail”.

“The United States and its allies are actually saying ‘no’ to key elements of these texts,” Russian Deputy Foreign Minister Sergei Ryabkov, said, referring to the agreements Moscow submitted last month. “This is what we call a dead end or a different approach.”

Talks earlier in the week had focused specifically on the United States and Russia in Geneva and a meeting of the NATO-Russia Council – the first in more than two years – in Brussels.

Russia annexed Ukraine’s Crimea peninsula in 2014 after mass demonstrations in Kyiv led to Ukraine’s Russia-friendly president fleeing the country and Russian proxies seized large chunks of territory in eastern Ukraine, sparking a conflict in which more than 13,000 have died.

Ukraine’s current president, Volodymyr Zelensky, came to power pledging to clinch a deal with Moscow on securing the return of lost territory, but now says only NATO membership can solve the country’s problems.

Back in Moscow, veteran Russian Foreign Minister Sergei Lavrov said the West “businesslike” tone at the talks gave reason to expect that Washington would consider future steps to be taken.

“And this position of the West, rather tough, arrogant, sometimes uncompromising, was set forth quite calmly, in a businesslike manner, which leads one to expect that the talks will be thought through in Washington,” Lavrov said.

Michael Carpenter, the U.S. envoy to the OSCE talks, said any discussion on upholding security for all meant “we must decisively reject blackmail and never allow aggression and threats to be rewarded”. He added: “The drumbeat of war is sounding rather loud and the rhetoric is rather shrill.”

Polish Foreign Minister Zbigniew Rau, current chair of the OSCE, echoed NATO’s anxiety earlier in the week by saying that the risk of war was “now greater than ever before in the last 30 years”.

In Washington, President Joe Biden’s National Security Adviser, Jake Sullivan noted that Russian responses during the week had varied from “hopeful” to pessimistic. The United States, he said, was prepared for further discussion on issues like rejuvenating arms control talks or being more transparent on military exercises.

The OSCE talks were the only forum this week attended by Ukraine, whose foreign minister Dmytro Kuleba said that the only way for Russia “to confirm their lack of intention to solve problems by force is to continue the discussion in the established formats, in particular in the OSCE”.

And the United States made plain it was up to Moscow to determine – and make clear – whether it intended to engage in serious diplomacy.

The top U.S. negotiator at the talks in Brussels and Geneva, Deputy Secretary of State Wendy Sherman, said earlier in the week Russia had to make clear what it wanted from talks.

“Russia, most of all, will have to decide whether they really care about security, in which case they should engage, or whether this was all a pretext,” she said. “And they may not even know yet.”

Kremlin leader Vladimir Putin has for weeks insisted that it was NATO that had boosted tension by shifting the Alliance and its weaponry ever closer to its border. He said Moscow had a right to ensure its own security and a failure to agree to its demands would prompt Russia to devise an appropriate military response.

Putin has said Russia has every right to deploy its troops anywhere it wished on its own territory – the current deployment was linked to exercises in southern Russia, he said.

He and U.S. President Joe Biden have held two meetings in the past month by video link, talks described by aides as substantive and preparing the ground for this week’s discussions.

But the last 50-minute encounter on 30th December was also punctuated by threats issued by both sides.

Russia annexed Ukraine’s Crimea peninsula in 2014 after mass demonstrations in Kyiv led to Ukraine’s Russia-friendly president fleeing the country and Russian proxies seized large chunks of territory in eastern Ukraine, sparking a conflict in which more than 13,000 have died.

Ukraine’s current president, Volodymyr Zelensky, came to power pledging to clinch a deal with Moscow on securing the return of lost territory, but now says only NATO membership can solve the country’s problems.