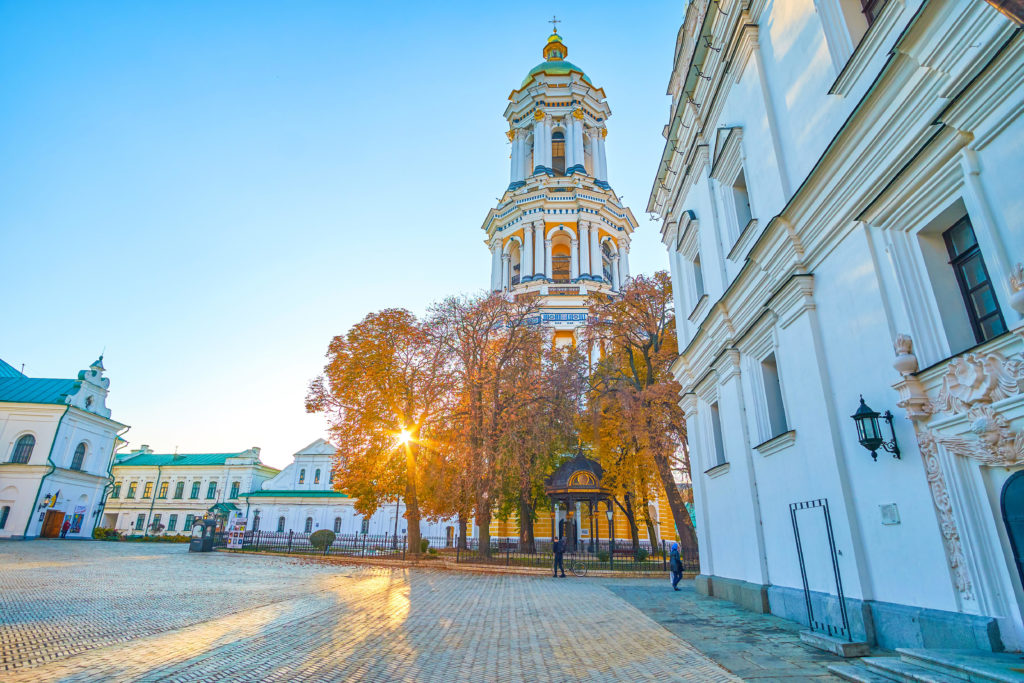 (The Tribune strives to adopt a neutral position in its news coverage at all times. In our opinion pages, we encourage external contributors to express their views. These views are the authors’; they do not necessarily reflect the views of The Tribune)

The strengthening of Ukrainian national identity over the past three decades of independence is an important and under-explored historical phenomenon that has had repercussions far beyond Ukraine’s borders. It has transformed the political climate across much of the former Soviet world and helped fuel today’s Cold War-style climate of confrontation between Russia and the West.

The Russian World or among the European community of nations. Ukrainian supporters of a Russia-friendly Eastern Slavic identity have always been able to count on powerful backing. From the very beginning, Ukraine’s post-Soviet nation-building journey has been defined by competition between rival narratives that have sought to place the country within the so-called Russia itself. Conversely, the Western world has never quite managed to make up its mind about Ukraine and has generally adopted a cautious approach.

Nevertheless, over the past thirty years, old imperial myths of eternal brotherhood with Russia have gradually fallen out of fashion among Ukrainian audiences and been replaced by an increasingly self-confident sense of European identity. The geopolitical implications of this trend have been profound and continue to reverberate throughout the region.

One of the key factors behind post-Soviet Ukraine’s turn towards the Western world has been Russia’s consistent failure since 1991 to work constructively with any Ukrainian leaders. Indeed, Russian bullying, arrogance, and chauvinism have arguably done as much as any domestic policies instigated in Kyiv to promote an independent Ukrainian national identity and nudge the country further away from the Russian sphere.

This pattern has been particularly pronounced since the outbreak of Russian military aggression in 2014. Over the past seven years, the self-defeating nature of Vladimir Putin’s Ukraine war has been widely noted. However, Russia’s problems with Ukraine predate today’s hostilities. Current Ukrainian President Volodymyr Zelenskyy’s exasperation with Putin is nothing new and closely mirrors his predecessor Leonid Kuchma’s similar frustration with Boris Yeltsin back in the 1990’s.

During the early post-Soviet years, it was already clear that Russia had no intention of relinquishing its claims to domination over what many in Moscow regarded as a nominally independent Ukraine. Yeltsin had initially fought against the idea of full independence. Once the USSR officially ceased to exist, the first Russian efforts to prize Crimea away from the new Ukrainian state were soon underway.

A decade later, Ukraine’s pro-Kremlin Party of the Regions became the political vehicle for efforts to turn Ukraine into a second Belarus. From the early 2000’s until its demise in 2014, the Party of the Regions worked closely with the Kremlin to move Ukraine along the same path taken by Belarus dictator Alyaksandr Lukashenka since 1994. These efforts benefited from overwhelming economic, political, and informational backing, but were rebuffed on two separate occasions by massive popular uprisings.

Russia continues to back political parties in Ukraine, but the influence of these political forces is now significantly diminished. Support for openly pro-Russian parties has understandably dwindled across the country since 2014, while large portions of the Kremlin’s traditional Ukrainian electorate have been disenfranchised by Russia’s occupation of Crimea and eastern Ukraine’s Donbas region.

As a result of these changes, it is now virtually impossible for pro-Russian forces to win a Ukrainian presidential election or secure a parliamentary majority in the country. Whereas Kremlin-backed candidates and political parties could expect to receive between 40% and 50% of the national vote a decade ago, the figure is now around 20%. With a disproportionate share of this support coming from pension-age voters, it hard to see how Russia could hope to mount a plausible political comeback in Ukraine.

Despite the apparently decisive nature of Ukraine’s geopolitical divorce from Russia, the confrontation between the two countries continues and is currently at its bloodiest stage. Since the Russian seizure of Crimea in 2014, over 14,000 Ukrainians have been killed and around two million have been displaced by a seven-year conflict in the east of the country that continues to simmer on with no end in sight.

Few in Ukraine expect this situation to change any time soon. Constitutional amendments adopted in Russia last year mean that Putin is likely to remain in power until 2036. As long as he is in the Kremlin, there is little prospect of peace.

Russia’s consistently counter-productive policies towards independent Ukraine betray the Kremlin’s failure to understand the true national character of its close neighbour, which was never as similar to Belarus and Russia as Moscow propagandists liked to claim.

During the Soviet era, Ukraine was the only one of the three republics to have a robust democratic movement demanding national and human rights. Unsurprisingly, Ukrainian political prisoners made up the largest national contingent in the Soviet gulags. This strong sense of national identity was underlined during the Perestroika era, when Ukrainians pushed hard for independence while Belarus was largely passive and many in Russia favoured maintaining a loose confederation that would leave their imperial identity intact.

During the first half of Ukraine’s three decades of independence, the country was led by an uneasy coalition of former communists and national democrats. The reigns of presidents Leonid Kravchuk and Leonid Kuchma (1991-2004) saw gradual progress towards a more independent Ukrainian identity in the state sector via official newspapers, schools, and higher education. However, Russian influence remained dominant in the media and popular culture, which often led to a blurring of the boundaries between the two countries.

Following the dawn of independence, the study of Ukrainian history gradually changed. After decades of Soviet denials, the commemoration of the man-made 1930’s Holodomor famine began to play an increasingly important role in national memory. Translated diaspora histories of Ukraine by Orest Subtelny and Paul R. Magocsi became influential. New school textbooks and historians revived the study of Ukrainian history as a subject independent of Russian and Eastern Slavic history. New monuments to Ukrainian heroes forbidden by the Soviet regime began appearing in Ukraine, while many Soviet monuments came down.

The 2004 Orange Revolution was the first of two great watershed moments in Ukraine’s post-Soviet national awakening that served to strengthen the country’s European identity while deepening the divide with Russia. Mass protests by millions of Ukrainians in November 2004 forced the authorities to rerun a rigged presidential vote, enabling opposition candidate Viktor Yushchenko to win convincingly via majorities in western and central Ukraine. Yushchenko’s victory demonstrated how a specifically Ukrainian identity was spreading across the country from its traditional western heartlands into the rest of Ukraine.

Yushchenko’s presidency ultimately failed to transform Ukraine politically, but it was highly successful in consolidating an independent Ukrainian identity. The Ukrainian Institute of National Memory was established in 2006. That same year, a law recognizing the Holodomor as an act of genocide against Ukraine was supported by all parliamentary forces except the Party of Regions and the Communists. More controversially, Yushchenko also backed the rehabilitation and official commemoration of Ukrainian nationalist groups from the Soviet era.

Russian dreams of returning Ukraine to the Kremlin orbit were temporarily boosted by the 2010 election victory of pro-Moscow presidential candidate Viktor Yanukovych, who had played the role of villain during the 2004 Orange Revolution. Yanukovych’s political comeback sparked renewed optimism in the Kremlin that Ukraine could still be reclaimed. He broadly embraced many of Russia’s key positions in the memory wars shaping Ukrainian national identity while opposing NATO membership for the country and rejecting efforts to revise established Soviet-era historical narratives.

However, Yanukovych’s 2010 election win did not mark a decisive turn back towards Russia. In reality, it was primarily the result of fatigue and frustration over the failures of the orange revolutionaries to live up to their bold promises. Ukraine’s last pro-Russian leader never enjoyed majority support and remained deeply unpopular throughout much of the country. When Yanukovych eventually tried to renege on his campaign trail commitment to sign an Association Agreement with the European Union, millions of Ukrainians once more took to the streets.

The 2013-14 Euromaidan Revolution and the Russian military aggression which followed in its wake, represent the second great turning point in modern Ukrainian history. As a result of the ongoing conflict with Russia, Ukrainian national identity has become significantly stronger throughout the southern and eastern regions of the country where pro-Russian and Soviet identities had previously flourished.

A prominent example of this trend is Dnipro, which ranks among the largest and most strategically important cities in eastern Ukraine. This heavily Russified city of around one million once served as the highly secretive centre of the Soviet rocket and missile industry. Prior to 2014, the city had routinely voted for pro-Kremlin candidates. Since the start of the war, however, Dnipro has undergone a remarkable transformation, becoming a patriotic frontline bastion of Ukrainian resistance to Russian aggression.

In many ways, the Euromaidan Revolution and ensuing armed conflict with Russia have accelerated the creation of a civic Ukrainian nation. A high percentage of Ukrainian military recruits and battlefield casualties have come from a majority of Russian-speaking areas of the country, especially Dnipro and the surrounding Dnipropetrovsk region. With Russian-speaking and Ukrainian-speaking Ukrainians fighting shoulder to shoulder against Kremlin forces, notions of a linguistic divide have receded into the background. Tellingly, high majorities of Ukrainians back the country’s 2019 Language Law, despite ongoing efforts by pro-Russian political forces to exploit the language issue.