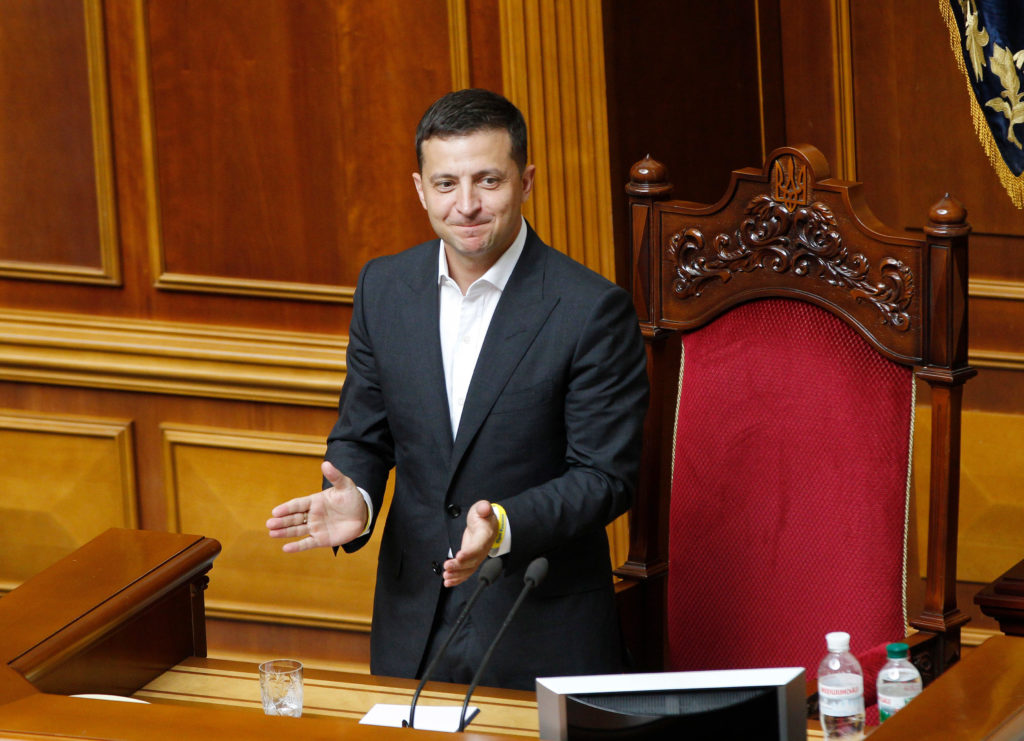 Opposition members of Ukraine’s parliament have launched a legal challenge to the chamber’s passage last week of a law intended to rein in the activities of “oligarchs”– industrial magnates with an outsize influence on the country’s politics and economy.

President Volodymyr Zelensky has made a drive against the magnates a focal point of his administration, particularly in view of the U.S. criticism that they were influencing the day-to-day operations of the government and of state-run companies.

The members of the opposition European Solidarity party of Zelensky’s predecessor, Petro Poroshenko, said procedures were breached and opposition amendments ignored as the legislation was rammed through the chamber amid chaotic scenes and shouts of “Dictatorship!”.

Commentators have criticised the legislation, saying it allows the country’s National Security and Defence Council – appointed by the president – a free hand to determine just who the country’s oligarchs are and what action might be taken against them.

Further attention was drawn to the procedure as it played out only hours after a gunman opened fire on one of the president’s closest aides and associates – while he was in New York about to address the U.N. General Assembly. Speculation was rife over who lay behind the attack, but some commentators linked it to the law under debate.

The law sets down criteria for defining an oligarch and empowers the Security Council to determine who meets the criteria. Individuals deemed oligarchs are barred from funding political parties or taking part in privatisations. Senior officials, including the president, prime minister and governor of the central bank, are obliged to disclose any dealings with oligarchs.

“Thanks to the anti-oligarch law, Ukraine gets a historic chance to build a civilised and clean relationship between big business and the state,” Zelensky said in a statement. “Yes, many politicians do not like it. Yes, they want to live as before, working for the oligarchs. Yes, there was a lot of pressure on our deputies, a lot of intrigue and even blackmail. But the law has been passed.”

Parliament speaker Dmytro Razumkov sent the new law off to be examined by the Venice Commission, a body of the Council of Europe that offers advice to east European states on whether legislation meets fundamental democratic criteria.

Analyst Serhiy Fursa said it was “very difficult to take a stand against the law against oligarchs. Because immediately you are assumed to be complicit.”

“…How do you fight against a system of oligarchs? By changing the system. And what are those changes? The rule of law. Courts. Anti-monopoly legislation, It’s a long, difficult road. But the only road,” Fursa wrote on nv.ua. “Will this law enable us to move against the oligarchs? No. Either it will lead to the wrong place or it won’t lead anywhere at all.”

As for the attack on Zelensky’s senior adviser, Serhiy Shefir – who had worked alongside the president in his previous career as a television comedy show host – several versions were proposed, including involvement by unknown industry figures opposed to the legislation. A senior security official described the shooting as an attempt to create security fears around the president. Some analysts refused to rule out the notion that the attack was staged by the authorities to draw attention away from key issues, like the passage of the legislation.

In New York, Zelensky enigmatically said that those behind the attack had meant to issue a warning to him.

“Saying ‘hello’ to me by shooting out of the forest at my friend’s car is weak. The response will be strong,” he said.

Eyebrows were raised still further when the president, in his address to the General Assembly, suggested the world body was failing in its task of tackling world crises – climate change, poverty and hunger — by performing like a “retired super-hero”.

“The world simply is throwing all those misfortunes into a big bag, and it’s now already ripping at the seams,” Zelensky told the gathering.

“We are all in one boat, but access to lifeboats is given first to first-class passengers,” said Zelensky.

Vaccination rates remain low in Ukraine, as in most former Soviet states, where vaccine hesitancy and mistrust of authority date back to the Communist era.