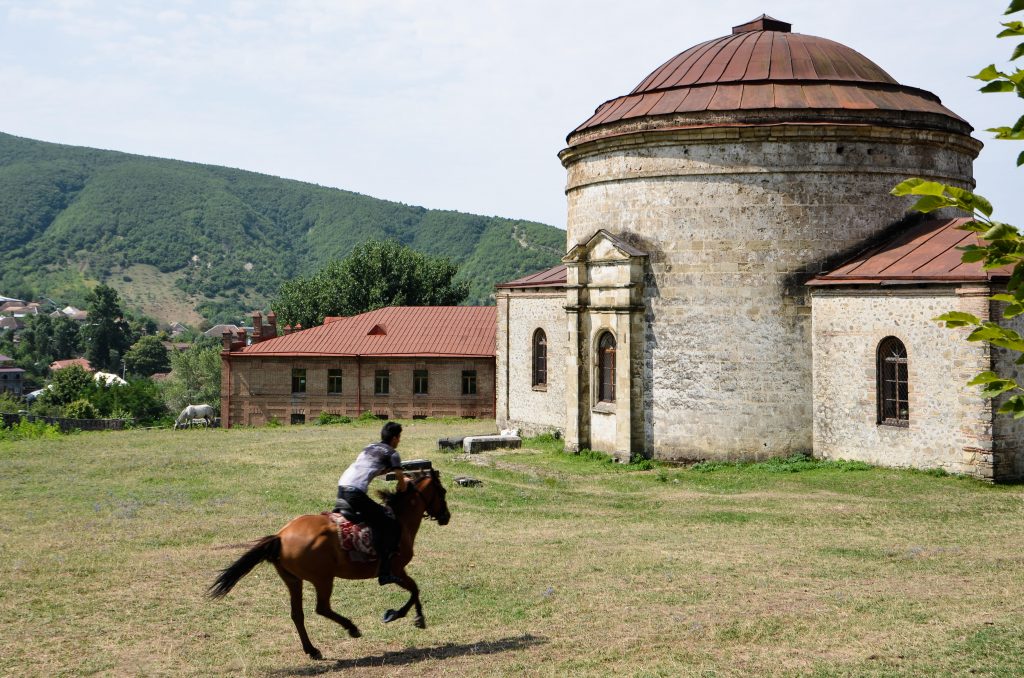 The small city of Sheki with a population of just over 68,000 is located in north-western Azerbaijan, in the Caucasus mountains, 240km from the capital Baku. The city has a long history dating back to the 7th century B.C.E. During its extensive history, Sheki acted as an important trading centre along the Silk Road and has been occupied by the Timurid empire, the Arabs, Georgians, Turks, and Russians. In the 18th century during the existence of the Sheki khanate, the local population of the city was engaged in silkworm breeding, craft, and trade, which still continues to this day and earned the city a place on the UNESCO World Heritage List in 2019.

Sheki was fully annexed by the Russian Empire by the Treaty of Gulistan in 1813 and experienced brief independence as part of the Azerbaijan Democratic Republic in 1918 before coming under full Soviet control in 1920. Due to the mineral springs found in the rivers of Kish and Gurjhana, Sheki became a popular health retreat similar to Borjomi in neighbouring Georgia during Soviet times.

The unique architecture of Sheki draws tourists to this small city in Azerbaijan. The suburbs and the old town are full of beautiful brickwork, houses with plaster moulding that imitate the Sheki Khans’ palace, little shops and taverns, and colourfully painted gates. Some of the churches date back 1,500 years and the picturesque Juma Mosque with its 40-metre minaret was built in 1745. Sheki is idyllic and a stark contrast to Baku – which is exactly why it makes an ideal complimentary destination while visiting Azerbaijan.

You can take a marshrutka to Sheki from the International Bus Terminal in Baku. There are at least 6 buses per day, with the first service at 9 am and the last bus at 5.30 pm. The journey by marshrutka takes around four hours and costs 7 manats (3.70 euros). Another option is to take the overnight train service from Baku to Sheki. There is one train departing Baku’s 28 May Station at 11.30 pm and arriving at Sheki Railway Station at 6.20 am the next morning, prices start from 4 euros.

Turkey, Serbia, and all post-Soviet states with the exception of Armenia and Turkmenistan can enter Azerbaijan visa-free. 95 countries including the US, the UK and EU citizens can enter with an e-visa for a single-entry visit of up to 30 days, the e-visa costs €22.

The Summer Palace of the Sheki Khans is the most visible landmark in Sheki. It was constructed in 1762 without a single nail. The palace is a masterpiece of craftsmanship, its exterior showcases Ottoman ceramics and Iranian mirror work. The most impressive decoration of the palace is the shebeke, a wooden lattice of pieces of coloured glass, held together without glue or a single nail. Some panes of shebeke use up to 1,800 individual pieces and at the right time of day, when the light hits the shebeke at just the right angle, it casts a gorgeous mosaic of light onto the wooden floor, not unlike an intricate Azerbaijani carpet.

The technique to make shebeke is complex and the full process is only taught to a few artisans who pass their meticulous craft from generation to generation. In the 18th century when the palace was being constructed local master craftsmen used original materials and glass imported from Murano in Italy to make the shebeke. You can visit a workshop on the grounds of the Summer Palace to see a quick demonstration of how it’s done.

The interior of the palace is even more lavish. Take the opportunity to join a short, guided tour for 5 manats (2.60 euros). Inside you can admire the beautiful miniature paintings depicting folk stories and scenes from nature that cover the rooms from floor to ceiling.

Also located within the Summer Palace complex, is the Three Saints Church or the Round Temple, which is believed to be a former Russian Orthodox Church. The exact story of the building is unknown, according to some records, it could actually be an Albanian church dating from the 5th to 8th century. Inside the Three Saints Church is Sheki’s tiny Museum of Folk and Applied Arts. You’ll find a nice collection of textiles, carpets, costumes and embroidery from Sheki and the surrounding villages.

There is also the Sheki Khan’s Winter Palace to visit which incredibly was only rediscovered by historians quite recently. Reconstruction began in the early 2010s and is a work in progress. So far, only one room has been fully restored to its former glory, but it is still worth visiting. The Khans’ Winter Palace is not far from the centre of town and can be found tucked away down a narrow-cobbled alleyway.

Take the time to visit Sheki’s craft workshops and textile museums, rifle through antiques at the bazaar, wander the charming back streets, and indulge in piti, a stew created with meat and potatoes and prepared in a terracotta pot. It is Azerbaijan’s national dish and a Sheki speciality. The Sheki locals are known for having a sweet tooth and the town is famous for its special type of baklava called Sheki Halva.

After a long day of sightseeing visit Abdulkhalig Hammam, the city’s oldest functioning public bathhouse, for a traditional kise body exfoliation. It is open from 10 am-5 pm every day, although women can visit it only on Monday, Tuesday, Thursday, while men can go on the remaining days of the week.

To really soak up the culture and history of the town the best place to stay is the Sheki Caravanserai Hotel. Caravanserais were constructed in the early 19th century to accommodate travellers on the Silk Road. There are 600 rooms of various sizes including the underground storage cells which merchants could access from their sleeping quarters by stepladder if they wanted to check on their goods during the night. In 1988, after a period of abandonment, the caravanserais was turned into a hotel. Every room has an impressive domed brick ceiling. The rooms are split into two parts, with a quaint sitting area in the front and a bedroom at the rear. It costs 50 manats (27 euros) per night. The Caravanserai Hotel is located a walking distance away from the Sheki Khans’ Summer Palace.

There are also more conventional hotel options in town. Sheki Palace Hotel (from 32 euros) is located on the hill near the Sheki Caravanserai just 50 metres from Summer Palace and comes with breakfast included. The Sheki Saray Hotel (from 29 euros) is located in downtown Sheki. Attached to the hotel is the Shebeke Restaurant, which is one of the best Western eateries in Sheki. If you want to experience some good old-fashioned Azeri hospitality, Sheki Host House (from 16 euros) is a welcoming, comfortable guesthouse.