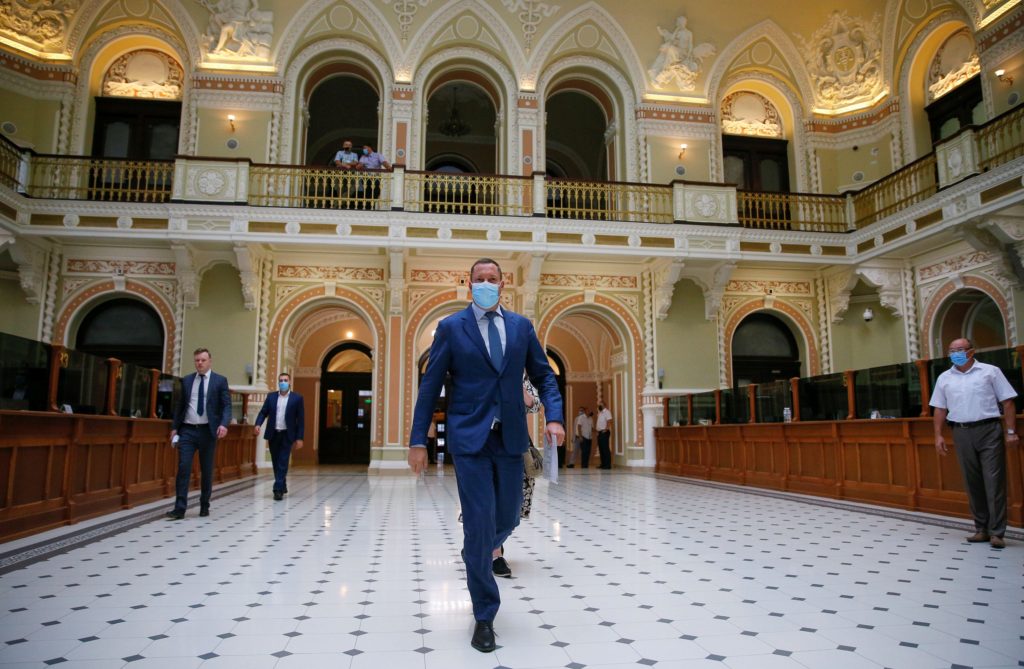 Ukraine and the International Monetary Fund (IMF) have reached a preliminary “staff-level” agreement after months of tortuous negotiations on resuming disbursements of a standby arrangement and, if fully approved, Kyiv stands to secure about $700 million by the end of the year.

But the accord was clinched amid an unfolding drama in the country’s central bank, with governor Kyrylo Shevchenko widely expected to be removed in the coming weeks – with the decision linked, at least in part, with the failure to complete the talks sooner and more smoothly.

Discussions underway since January had focused on guaranteeing central bank independence, uprooting corruption, overhauling the judicial system and also ensuring standard corporate governance. An IMF statement said the latest four-week remote mission had culminated in the deal supporting the government’s updated policies in tackling the effects of the COVID pandemic and maintaining macroeconomic and financial stability.

“Continued steadfast implementation of strong policies in these areas, consistent with objectives under the programme and agreed commitments, will pave the way for the IMF Executive Board’s consideration of the review, expected in November,” the IMF said.

Ukrainian officials claimed victory after months of difficult talks on public policy and hard-fought approval by parliament of key legislation.

“The IMF’s assessment demonstrates that Ukraine is actively implementing reforms for the development of a modern state with a developed market economy,” Prime Minister Denys Shmyhal said.

The Fund agreed to a $5 billion standby arrangement in June 2020 and an initial tranche of $2.1 billion was quickly disbursed. But subsequent tranches were held up by the Fund’s insistence on guarantees for central bank independence and on the creation of institutions to revamp the judical system. A mission at the beginning of the year left with no results.

Months of discussions and horse-trading culminated in parliament approving legislation on the composition of a 16-member High Qualification Commission of Judges, which selects and evaluates justices. Foreign experts are to be included on a High Council of Justice to oversee judicial appointments. A separate body, the Council of Judges, the Ukrainian judiciary’s highest body, ensures the independence of judges and was until recent changes, elected by secret ballot.

U.S. officials had also criticised what they saw as interference in the corporate governance of state-run corporations, citing the removal by the cabinet order of oil and gas concern Naftogaz.

As the talks dragged on, President Volodymyr Zelensky complained that the IMF was treating Ukraine badly by failing to take account of the fact that it had been waging a war for seven years with Russian proxies occupying large swathes in the east of the country.

Central bank governor Shevchenko praised the agreement as an important step in achieving financial stability and a solid legislative base – and cited the strengthened foundation for the central bank and the banking sector as a whole, as well as adherence to measures to keep inflation low, reduce the number of bad loans and uphold banks’ liquidity amid the crisis linked to COVID.

“Let us move forward from here with the programme and focus on efforts to carry out the agreements that have been reached,” he said.

The government has forecast gross domestic product (GDP) growth this year of 4.0 percent. The IMF has been more pessimistic, with a forecast of 3.5 percent.

News reports have suggested for months that Zelensky and officials close to him are deeply unhappy with Shevchenko and want him out – little more than a year after his appointment and complaints from his predecessor that he was being removed and being subjected to political pressure.

Critics have cited the slow progress with the IMF, discontent within the bank, mass resignations in recent months and suggestions that the governor was too centralised in imposing his authority and failed to be a “team player”.

A large group of employees in the central bank’s licensing department quit en masse in July, saying they could not work in conditions decision-making procedures and a failure to allow oversight bodies to operate. The group subsequently met Zelensky, who was quoted by the website lb.ua as telling the former central bank employees that Shevchenko’s appointment was “my big error in staffing”.

Shevchenko defended his actions as central bank chief in an interview his month with the site lb.ua, saying the criticism was unjustified.

“Can you tell me just what serious grounds there are for dismissing me?” he told the website. “During my entire time as head of the central bank, I did everything that was necessary to strengthen the stability of the banking sector and the financial system as a whole. Capitalisation and profitability are rising in our banking system.”

Zelensky’s office has dismissed suggestions of the central bank governor’s dismissal as mere rumours. And the central bank said it was continuing to work on “the many important tasks that lie ahead”.

Officials appeared to be taking no chances in the weeks before the Fund extends final approval.

Parliament was due to consider this week three bills still deemed necessary to secure that approval – regulations governing the central bank’s Council, an oversight body, and procedures on adopting the state budget.