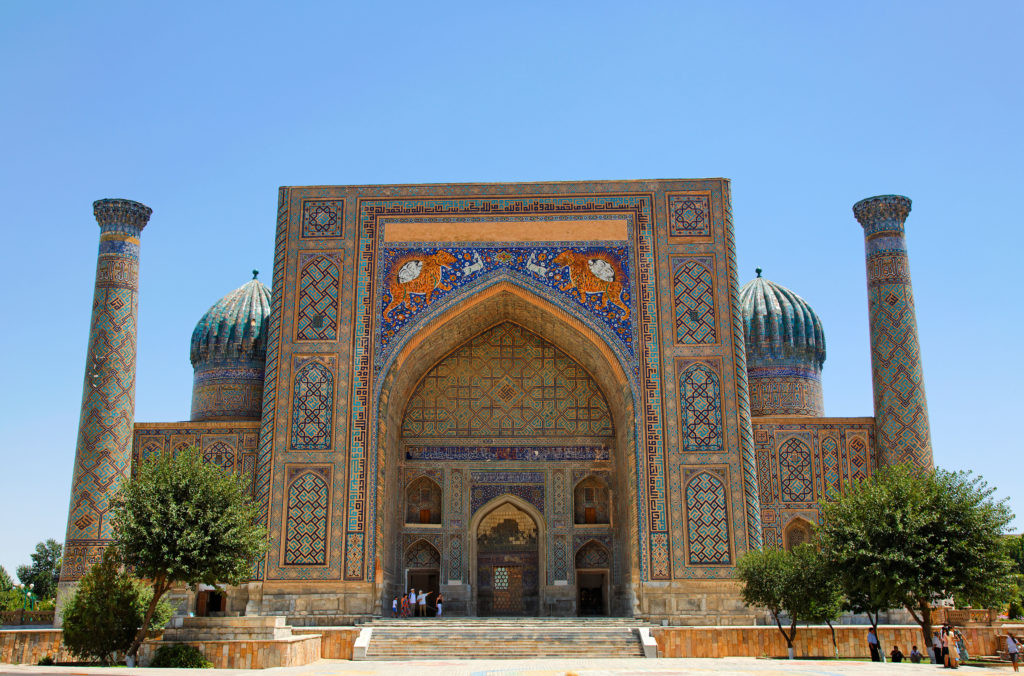 The historic city of Samarkand should be the top destination on anyone’s list when travelling to Central Asia.

Located in southeastern Uzbekistan, in the Zarefshan river valley along the ancient Silk Road, Samarkand’s fascinating history comes to life through the city’s stunning architecture  –  a key factor in its distinction of being on UNESCO’s World Heritage List as “Samarkand – Crossroads of Cultures” from 2001.

This is the home territory of Tamerlane, who founded the Timurid Empire in and around modern-day Afghanistan, Iran and Central Asia and, as an undefeated commander,is widely regarded as one of the great military tacticians in history.  He made Samarkand his capital in 1370. Of mixed Turkic and Mongol background, Tamerlane was also considered a patron of arts and architecture and launched what became known as the Timurid Renaissance.

Samarkand came under other rulers as well.  It was sacked by Alexander the Great in 329 BCE and was ruled by a succession of Iranian and Turkic rulers until it was conquered by the Mongols under Genghis Khan in 1220.

The city came under the sway of the Russian Empire when it was taken by a force commanded by Colonel Konstantin Petrovich von Kaufman in 1868. In Soviet times, Samarkand was the capital of the Uzbek SSR from 1925 to 1930 before being replaced by Tashkent, the capital of independent Uzbekistan.

The finest craftsmen and architects were brought from Delhi, Damascus, Baghdad, Ankara, Yerevan and even Russia to build the new capital of Samarkand during Tamerlane’s rule in the 14th and 15th centuries. The melon-shaped domes of the mausoleums were designed to resemble yurts, traditional Mongol tents. The dominant colour of the buildings in Samarkand is blue – the colour of mourning in Central Asia and capable of warding off “the evil eye”.  Blue also represents water, a rare resource in Central Asia and the blue walls therefore symbolise the city’s wealth.

Although Uzbek is the state language in Uzbekistan, around 70 percent of Samarkand’s population speak Tajik, a dialect of Persian, as their mother tongue. Uzbek is the second language of the city and Russian the third.

Samarkand is by no means stuck in the past. It is a thriving, modern city, the country’s first to join the European Bank for Reconstruction and Development (EBRD)’s Green Cities investment program in 2001. The EBRD plans to invest in the development of electric transport in the city and contribute to its sustainable development in pursuit of Uzbekistan’s plans to achieve carbon-neutral status by 2050.

Time of year to visit: It’s best to visit Samarkand from March to May and September to October for the most comfortable weather and to avoid the summer crush of tourists.

Documents: Citizens of 92 countries can enter Uzbekistan visa-free. Those from 52 countries, including the United States, can obtain an e-visa valid for 30 days. It can be purchased for $20 and travellers must apply for it at least three days in advance of the start of their trip.

This square is the pearl of Samarkand and a masterpiece of medieval Islamic architecture. It was built during the Timurid Empire after Samarkand had been burnt to the ground by Genghis Khan. Registan Square was used for royal announcements and public executions and once had markets and caravanserai (roadside inns) to cater to merchants and travellers seeking an oasis in the desert. Today, three madrasahs, Islamic schools, frame this beautiful square: Ulugh Beg Madrasah, Sher-Dor Madrasah and Tilya-Kori Madrasah.

The Ulugh Beg Madrasah is named for Tamerlane’s grandson, who built it in 1417. More an astronomer than a ruler, Ulugh Beg founded an observatory and produced the most comprehensive catalogue of stars since Ptolemy from the second century. His passion for the stars can be seen in the portal of his madrasah, which depicts stars against the sky.

Sher-Dor Madrasah, which translates as “possessing lions” was named after the motif on the upper part of its pishtaq, or rectangular, portal which depicts a tiger hunting a white deer with a human flanked by a rising sun appearing behind the tiger. Sher-Dor madrasah is also richly decorated with glazed bricks and tiles, forming various mosaics and intricate geometrical patterns, “Persian knots” designed to be seen from a distance. The friezes of the minarets and the dome drums are covered with ornamental inscriptions in Arabic.

It’s also worth visiting the mosque inside Tilya-Kori Madrasah as its golden mosaic ceiling, due to an illusion, looks like a dome. If you don’t mind heights or feeling claustrophobic, for a little bit of extra money the Registan Square guards can take you up one of the many minarets to gain a bird’s eye view of the square. In the evenings, there are performances inside Registan showcasing a genre of music called Shashmaqam, unique to Uzbekistan and Tajikistan.

This necropolis was formed over eight centuries, between the 11th-19th, and now includes tombs, temples, mausoleums and ritual buildings. There is a legend that Qutham ibn Abbas, a cousin of the Prophet Muhammad, is buried here. The ensemble is made up of three groups of structures: lower, middle and upper, connected by four-arched domed passages called chartaks. This complex has some of the richest tilework in the Muslim world. The most beautiful tomb is the Shodi Mulk Oko Mausoleum (1372), the resting place of either a sister or niece of Tamerlane. The exquisite majolica and terracotta work is impressive because of the minuscule space between the tiles. They are of such exceptional quality that almost no restoration was needed.

Gur-e-Amir means “tomb of the kings’” and is the final resting place of Tamerlane and his grandson Ulugh Beg. What many people don’t know is that the architecture of this site inspired the Taj Mahal in India. The tomb is an octahedral building crowned by an azure fluted dome. The exterior decoration of the walls consists of the blue, light-blue and white tiles organised into geometrical and epigraphic ornaments against a background of terracotta bricks. The dome is bright blue with deep rosettes, white spots, and heavily ribbed fluting. Tamerlane’s tomb was opened in June 1941 by the scientist Mikhail Mikhaylovich Gerasimov. On the tomb is inscribed the warning “When I Rise From the Dead, The World Shall Tremble”. Allegedly, once opened, another inscription was discovered: “Whosoever Disturbs My Tomb Will Unleash an Invader More Terrible than I”. Although people close to Gerasimov claimed the second warning was a fabrication, the legend persisted. Stalin believed it and two days after the tomb was opened, Operation Barbarossa, the Nazi invasion of the Soviet Union, began. Tamerlane was reburied with full Islamic rites on December 20, 1942, about one month before the Soviet victory at Stalingrad.

This mosque is the jewel of the Timurid Empire and one of the biggest mosques in the Islamic world. Completed in 1404, it could hold up to 10,000 worshippers and was built by architects from India and Iran, along with 95 elephants hauling construction material. Structural problems led to its deterioration from the 16th century onwards and in 1897 it collapsed during an earthquake. In the Soviet era, reconstruction began on the mosque to return it to its former glory. Entering through the 35-metre high parade portal leads to a courtyard and opposite is a 40-metre high cupola. Located in the middle of the courtyard is a stone pedestal, a huge Quran stand crafted from ornate marble blocks. The Bibi-Khanym Mosque was one of the most ambitious architectural projects of the Timurid period and influenced the architecture of Central Asia as well as of Iran and Afghanistan.

Samarkand’s largest market is bustling and full of smells, sounds and colours. It is the perfect place to learn more about the local culture. All kinds of spices are sold here, as well as fresh produce, bread, meat, and local snacks. Be sure to try halva, a sweet resembling fudge which originated in the region, but is equally popular in South Asia, the Middle East and the Balkans.