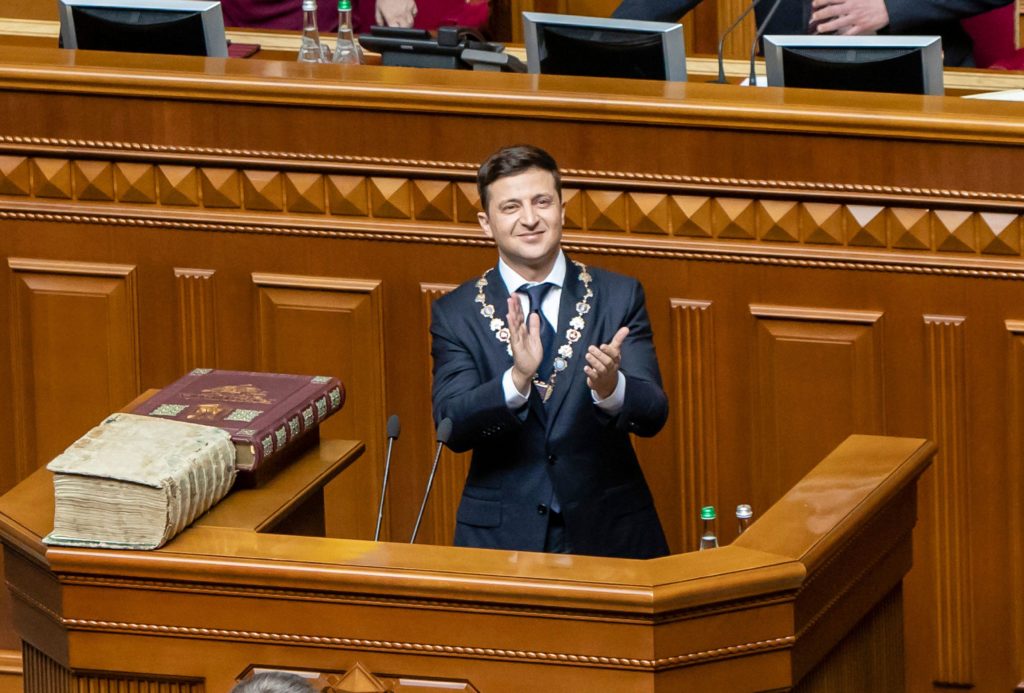 President Volodymyr Zelensky said the International Monetary Fund (IMF) should take account of Ukraine’s difficult circumstances in drawing up its assistance programmes, particularly its conflict with armed Russian proxies in the Donbass region, but pledged to do whatever was necessary to ensure a resumption of the Fund’s credits.

The IMF agreed a $5 billion standby arrangement with Kyiv a year ago. $2.1 billion of that was disbursed quickly, but subsequent tranches have been withheld. The Fund is demanding progress on judicial and legal reforms, guarantees of central bank independence and an end to heavily-subsidised energy prices. Other lenders, including the European Union, have also made new credits contingent on reforms. The United States has also criticised the pace of reforms.

Zelensky, in an interview with three Western news agencies, said the Fund was being unfair in viewing Ukraine in the same terms as other countries.

“… I think it is impossible to compare the strategy and tactics of the IMF’s behaviour towards Ukraine with many countries. You just can’t put it on a par with others,” Zelensky said.

Zelensky said Ukraine was doing its best to fight corruption, curb the power of “oligarchs” – magnates with undue influence on politics and the economy — and meet the required “beacons” – changes in legislation and rules demanded by the Fund to free up further credits.

“It is unfair to tie these or those ‘beacons’ to certain tranches,” he said. “Because reforms are for us. You can’t trade reforms for money.”

The president listed some of the goals cited by the IMF – including an overhaul of key institutions, like appointments to the High Qualification Commission of Judges – a body intended to recruit judges – and the High Council of Justice – which has overall responsibility for the discipline of judges – and the Council of Justice, the judiciary’s highest body until now elected by secret ballot.

Key legislation, the president said, was before parliament. But the passage was by no means certain as the single-chamber assembly can be a fractious body and some parties have been reluctant to endorse enabling laws. One bill on the National Agency for Corruption Prevention – one of several anti-corruption bodies – had to be vetoed because of amendments inserted at the last minute.

The United States has been particularly aggrieved at the dismissal – by cabinet order – of the head of the state-run oil and gas company Naftogaz, citing it as a flagrant disregard for normal corporate governance.

Ukrainian officials say considerable progress has been made in months of discussions since an IMF review ended in February inconclusively and expect the flow of credits to resume in the early autumn.

IMF Spokesperson Gerry Rice told a briefing in Washington earlier this month: “We remain, I should say, closely engaged with the Ukrainian authorities on progress towards concluding that first review. That means discussions around implementing the policies and reforms in that program.”

In his interview, Zelensky said Ukraine would do what the IMF expected of it, but could live without further credits if it came to that.

“This is important above all for our economic stability and investment climate. Because other programmes and investor attitudes are always tied to the IMF programme,” he said.

He added: “We will live. We have everything, seriously … We have increased customs revenues, and the tax service is working much better. Therefore, I do not see this as a global problem. In any case, we need to learn to live independently.”