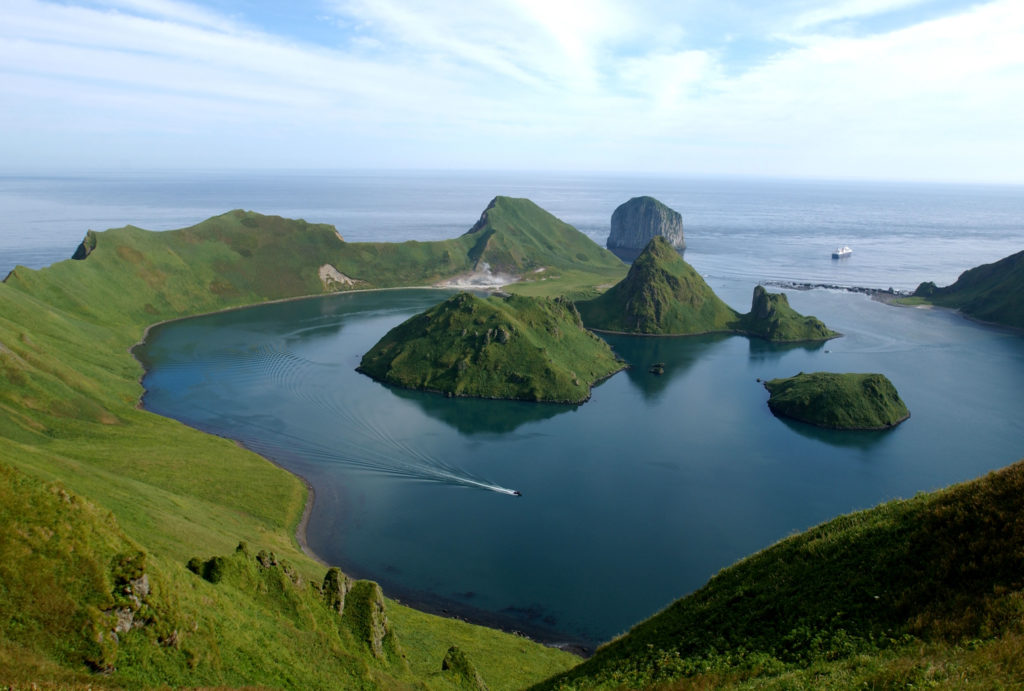 They’re remote. They have an intriguing history. And they have some of the most spectacular scenery imaginable, with 100 volcanoes, 35 of them active, and numerous hot springs. One volcano erupted only a year ago.

The Kuril chain of more than 50 islands stretches 1,200 km from the southern tip of the Kamchatka peninsula to within sight of Japan’s northernmost Island, Hokkaido. They lie on top of a seismic region of the Pacific – part of the vast Ring of Fire stretching along the entire rim of the world’s largest ocean. Tsunamis and earthquakes are not uncommon here.

The region’s indigenous people, the Ainu, have been colonised in turn by Russia and Japan for four centuries as ownership of the islands shifted back and forth.

Some of the Islands changed hands twice by virtue of two 19th century treaties trying to establish territorial limits.

But the Kurils came under definitive Soviet rule in 1945 when the Yalta agreement, better known for dividing up eastern Europe, handed them to Moscow in disputed circumstances as part of a deal for the Soviet army entering the Pacific War. Soviet forces seized and occupied the islands as Japan was surrendering. Six decades of negotiations over the four southernmost islands — Iturup, Kunashir, Shikotan and Habomai — have failed to produce an agreement on Japan’s call for their return. And to this day, no post-war peace treaty has been signed between Moscow and Tokyo.

The role played by the islands for both sides in World War Two is very much in evidence as abandoned armoured vehicles litter fields and tanks and fighter jets were left behind after Moscow abandoned a military base. Also remaining are wartime Japanese tunnels left near Kasatka Bay and the airfield of the modern airport on Iturup Island was used as the starting point for Japanese bombers to attack Pearl Harbour in 1941.

A small number of Ainu people still live on the Kuril Islands and have their own distinct language and culture, although many have assimilated into Russian life and have Slavic surnames. Some theories suggest that the Ainu people descend from the Polynesians as they have similar face tattoos, which they consider part of their religion.

The brown bears found in the region are worshipped by the Ainu people and one of their old traditions was to raise the bear cubs themselves.

The islands’ nature ranges from the tundra in its sub-Arctic north, where you’ll find only sparse forest or no trees at all, to dense spruce, larch, and bamboo forests in the temperate south. Two dozen types of mammals are found on the islands, including brown bears, wolverines, weasels, and Arctic foxes. Along the coast and in the surrounding waters you can see Steller sea lions, the largest in the family group, as well as Pacific walruses and a number of whales, including the very rare Pacific Grey Whale.

Getting there: Flights with Aurora Airlines operate three times a week from Yuzhno-Sakhalinsk – on the Russian island of Sakhalin to the west — to Yuzhno-Kurilsk. Flight time 1hr 20mins. The three most populous islands, which can be reached by public boat and/or plane, are Kunashir, Iturup, and Shikotan. The uninhabited middle islands can only be visited with the use of a private boat, helicopter or with a tour group.

Documents: In addition to a Russian visa, those travelling to the Kuril Islands need a special permit as it is a designated border zone. This permit is issued by the Sakhalin branch of the FSB Coast Guard in Yuzhno-Sakhalinsk. Applications for the permit can be submitted between 9:30 and 10:30 a.m. on working days and are usually ready to pick up the following day.

Accommodation: There are several small hotels on the main Kuril Island of Kunashir, one on Iturup and four hostels on the northern island of Paramushir.

Time of year to visit: June to September. August is the warmest month, with average temperatures of 16 C, sometimes reaching 19c.

Kunashir: Kunashir is the southernmost of the Kuril Islands, formed by four active volcanoes that were once separate but are now joined together by low lying areas of lakes and hot springs. To the north of Kunashir is the Tyatya volcano, the highest peak on the island, standing at 1,819 metres. On the south of the island is another volcano, the Mendeleev, which has natural hot springs. The four active volcanoes on the island have led to the formation of a unique hot beach on the Pacific Ocean shore. The sand on this beach retains its heat due to volcanic steam rising up through the surface, making it possible to bake crabs and cook eggs in the sand. Also on this island is Cape Stolbchaty, a UNESCO World Heritage site, similar in appearance to the Giant’s Causeway in Northern Ireland. Much of the island is made up of the Kuril Nature Reserve, established in 1982 to preserve the population of rare birds and animals, mostly sea animals. Seals, northern fur seals, grey dolphins, humpback whales and other animals also live on or around the island.

Iturup: The hot springs from the volcano Baransky lure tourists to this island. On the slopes of this volcano, there are unique thermal springs and reservoirs, geysers, lakes, sulphurous streams, and pools of boiling mud. The most famous hot lake is the Emerald Eye, where the temperature reaches 90 C (194F). Out of it flows the river boiling with hot acid water, which in one place breaks off and falls from a height of 8 metres in a steaming hot waterfall. On the rocky plateau of the volcano, a geothermal station produces electricity.

Shikotan: Found to the east of Kunashir, this small island with a population of just over 2,000 is unique in that its two volcanoes are dormant, so there is no fear of getting caught up in an eruption. Shikotan’s rolling green hills and rocky ridges have been compared to New Zealand. The island is most famous for its cape called the ‘End of the World’ so called because of the expansive Pacific Ocean ahead of it, with the closest land mass east of it being California.

Simushir: This uninhabited island in the middle of the chain used to be home to the Soviet Navy and its submarine base between 1987-1994. This now abandoned military base can be found in Brouton Bay, formed from the flooded volcanic caldera of the island’s northernmost volcano, Urataman.

Onekotan: It is the second largest island, after Paramushir, in the northern subgroup of the Kurils and has two active volcanoes – Krenitsyn and Nemo. The Koltsevoye Lake, or Ring Lake, is situated in Krenitsyn volcano caldera, the deepest lake in the Russian far east, measuring 369m and forming a perfect circle around the top of the volcano.

Atlasov: Is the northernmost of the Kuril Islands and also contains the tallest mountain, the submarine volcano Alaid, which stands at 2,339m. The cone of the volcano, which rises out of the ocean, is perfectly shaped and looks similar to Japan’s mount Fuji. Although the island is now uninhabited, it used to house a women’s gulag during Soviet times. The women, political or intellectual prisoners, were sent to Atlasov island to raise foxes for fur.

Paramushir: This island in the northern half of the chain is home to the most active volcano of the Kuril Islands, Ebeko. Standing at 1,156 m, this volcano emits steam, gas, and lava regularly as its last huge eruption was in 2020. In comparison to the explosive north, the southern part of this island is abundant with flora and fauna. While climbing Fussa Peak you can find rose hips, crowberry, reindeer mosses, blueberries, and honeysuckle.