TRAVEL
- Russia
Republic of Karelia: a natural and historic wonder in North-western Russia 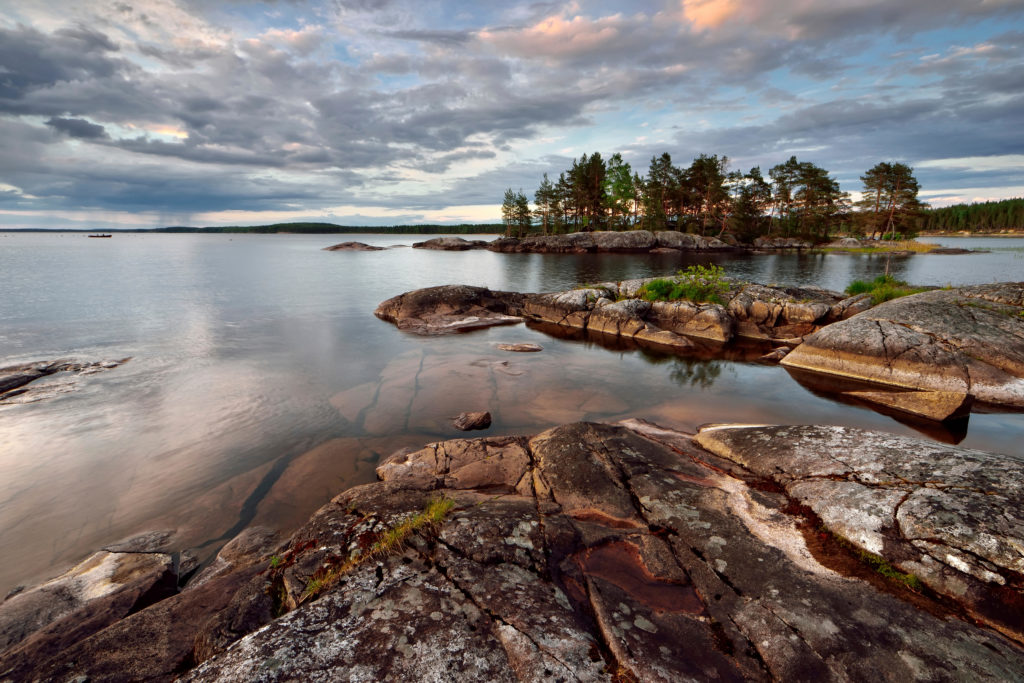 Located just under the “Arctic Circle”, the Republic of Karelia is a federal region of Russia with a rich history and abundance of natural wonders.

The Russian region of Karelia is part of the larger Northern Europe region of the same name, currently split between Russia and Finland. Despite its vast territory, the population of Karelia is small, around 600,000 people. The historical sights, unique nature and convenient location are what distinguishes Karelia from many other destinations in Russia and Northern Europe.

In its early history, Karelia was inhabited by indigenous ethnic groups, Karelians, closely related to Finnish people and heavily influenced by raiding Vikings, as well as the people of the Novgorod republic. The region’s territory has been continuously disputed between Scandinavian and early Russian states, becoming a reason for multiple wars and border changes. By the 18th century, as a result of post-war treaties, most of Karelia’s territory became part of Imperial Russia. Following the Soviet-Finnish war of 1939, an additional territory of Finnish Karelia was ceded to the USSR, effectively completing the region’s integration to Russia as the Autonomous Republic of the Soviet Union (ASSR).

As of today, more than 75% of the republic’s population are ethnic Russians, while around 60,000 descendants of indigenous Karelians also remain in the region. Consequently, Russian is the main and the only official region in the republic. Nonetheless, a small minority of the population speak Finnish and Karelian, as they continue to safeguard their ancestors’ culture and traditions. There remain communities, such as Big Selga and Kinerma, where local handicrafts, traditional costumes, fishing and old believers are prevalent and safely guarded by the villages’ population.

The north-western location of Karelia and its situation between the White and Baltic Seas determines the unique geography of Karelia. Bodies of water play a central role in the territory of Karelia and its attractiveness for tourists. The region also features more than 60,000 lakes scattered throughout. Moreover, the two largest lakes in Europe, Onega and Ladoga, are also located in the republic.

The richness of natural and food resources in Karelia, coupled with the abundance of rivers to transport goods have made Karelia a historically rich region, which industries and crafts relied heavily on local extraction and production. Before the 10th century, the extraction of copper ores already began in Karelia. More recent history of the region saw it rely heavily on forestry and timber exports, with wood processing being the major industry in the region to date.

How to get there: the capital of Karelia republic, Petrozavodsk, is conveniently accessible from Russia’s largest cities. Petrozavodsk Airport is connected to the Russian Capital, Moscow, with low-cost return flights available for $60. The city can also be reached by a direct 5-hour train from St. Petersburg with prices starting from $13. The local destinations within the Republic are mostly accessible by local taxi services and occasionally by bus routes.

Time of year to visit: Karelia is a great destination both during the winter and summer months. The temperature during winter rarely reaches below -15 °C, and averages at a comfortable 20°C in June-August.

Documents: citizens of only 35 countries have visa-free access to Russia, for remaining visitors, a tourist visa application must be submitted. It is processed for up to three weeks and may cost up to $160. In 2021, Russia suspended the introduction of the simplified e-visa process due to the ongoing pandemic, but plans remain to introduce the system in near future. 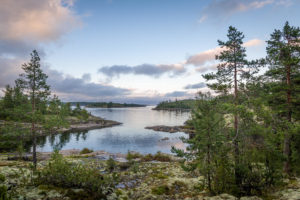 Ideal for nature lovers, Ladoga Lake is the largest lake body in Europe. The best time of the year to visit Ladoga is during the summer months. Boat tours are readily available from settlements around the lake, such as Sortavala. Many tourists also choose to camp in the preserved natural locations at the lake, and numerous camp sites are available throughout.

The lake is relatively shallow, with 51 metres of average depth, and therefore features many islands, some of which are inhabited and possess many notable landmarks. The largest island in the Ladoga basin, Valaam, hosts one of the oldest monasteries in Russia, the Valaam Monastery. Founded between the 10th and 15th centuries, the monastery features unique orthodox church architecture, as well as a natural park and museum dedicated to the history of the monastery and Karelia.

A unique location in Karelia republic is often chosen by visitors from St. Petersburg for a one-day visit. Ruskeala Mountain Park is a man-made natural reserve, which was formed following the exhaustion of marble deposits, previously extracted in the region. The abandoned marble quarries and mines were filled with water and, along with the surrounding natural reserve, became an attractive destination for active tourists. The mountain park features beautiful canyons for boat trips, numerous hiking trails as well as opportunities for summer and winter sports, such as diving, bungee jumping and driving on snowmobiles. The entry to the park costs around $5 and it is easily accessible by car or train from St Petersburg or the local town Sostravala.

The Kizhi Island is located at the second-largest lake in Karelia and in Europe, lake Onega. The island, populated from the 15th century by rural settlements, features one of the most unique structures in Karelia – the Kizhi Pogost. Built exclusively of wood, it is a compound of two churches and a bell tower. The main architectural marvel is the Transfiguration Church, which is built without using a single nail and features 22 domes. Services are still held in the church, but only during the summer months, which is when it is advisable to visit Kizhi. The sight has been included in the UNESCO list of World Heritage sights for its unique architecture, historical significance, and longevity.

Kizhi is easily accessible by boat from the river port of Petrozavodsk, the capital of Karelia. Return tours to Kizhi cost around $50 and it takes 1 h and 15 min to travel to Kizhi. Alternatively, many visitors choose to visit antique village Velikaya Guba on the bank of Onega lake and travel 18km by boat to Kizhi from there. 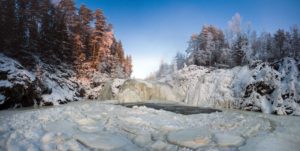 There are numerous notable nature reserves in Karelia, but the Kivach Nature Reserve is particularly worth visiting. Covering an area of 42 square miles, it features a rich forest, extensive river systems and diverse flora and fauna. While not all of the territory is accessible to tourists, particularly remarkable and open for access is the Kivach waterfall. It is the second-largest non-mountainous waterfall in Europe and is also classified as a cascade waterfall, being composed of multiple smaller waterfalls, with a 10.7-metre total height of the waterfall. It is accessible by the main hiking trail of the Kivach reserve and is only 60 kilometres away from Petrozavodsk. The waterfall is visited by 30-40 thousand tourists annually and includes notable visitors, such as the Russian Tsar Alexander II.